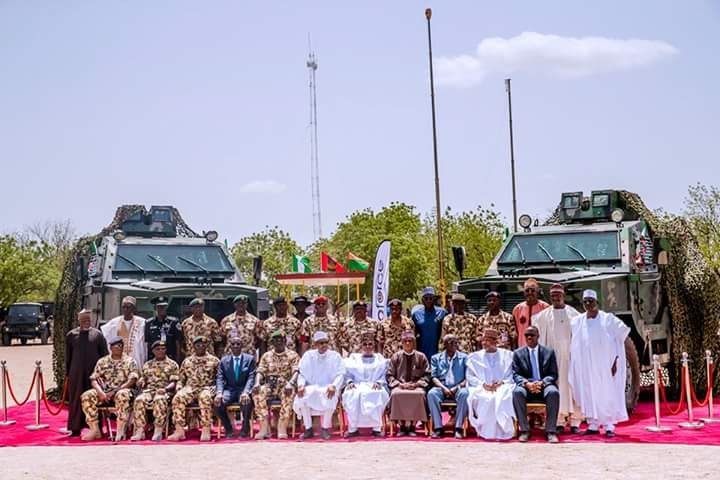 The Nigerian Army has officially inducted the Nigerian-made Proforce Ara Mine Resistance and Protection (MRAP) into service. The vehicles were commissioned by the Nigerian President Muhammadu Buhari during the Nigerian Army Day celebration held in Monguno Borno State on the 6th of July 2018.

The Nigerian Army Day celebration is set aside to mark the date Nigerian troops  began routing out the Biafran separatist forces on June 6, 1967. The week-long event was also made to celebrate soldiers fighting the Boko Haram insurgents in the restive North-East of Nigeria.

During this year’s event, President Buhari was received by the Governor of Borno State  Kashim Shettima, the Nigerian Chief of Army Staff, Lt-Gen Tukur Buratai, the Chief of Air Staff Air Marshal Saddique Abubakar and other members of the National and State Assemblies.

A hostage rescue was also simulated shortly after, with elite military units werr seen parachuting from a Dornier Do-228 light utility aircraft.

Prior to the Nigerian Army Day celebration 2018, a military exhibition and trade fair was organized which saw the unveiling of some unique indigenous products like the Proof-of-Concept (PoC) of a Nigerian-made helicopter, Meal-Ready-to-Eat (MRE).

Proforce Limited, a Defence Company from Nigeria which pioneers the development and design of armoured vehicles (Tactical vehicles, SUVs and Armoured Personnel Carriers (APCs) has recently (for the first time) exhibited its products at the well-renowned Eurosatory 2018  and also at the Africa Aerospace and Defence 2016 (AAD 2016).

The first combat ready  Proforce Ara (‘Thunder’) MRAP which is optimized for the African market was initially unveiled by the company in a defence exhibition held in South Africa on 14-18 September 2016.
Nine Units has already been delivered to the Nigerian Army and has since commenced field trials with immediate deployment to the active IED-filled North Eastern theater where the military is currently battling the deadly Boko Haram terrorist sect.