The current state of the Nigerian Air Force 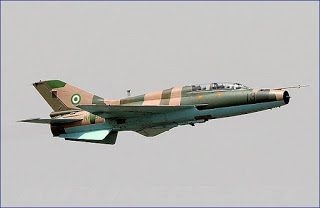 However,  what  the  NAF lacked  in  size,  its  experience,  sheer  dedication and  gong-ho  attitude  towards  adversity more than  make  up  for  its  inadequacies…

“To be effective in the increased threat environment posed by contemporary security challenges, the NAF must possess the capacity and capability to project power across and within its operational theatres of engagement. The primary means by which the Service achieves power projection is through the use of its air assets.” — Nigeria’s Chief of Air Staff

The Nigerian Air Force (NAF) was established in 1963 and since then it has continually faced numerous challenges one way or the other- corruption, endemic budget mismanagement and looting, lack of credible aerial platforms and ineffective policy decisions amongst others. This is mostly attributed to carelessness and greed of the past military leaders. Years of negligence has left the NAF almost in a collapsed stature with old and outdated working equipment, low morale within the rank and files and finally poor combat performance record which led to the service lost an Alpha jet in Mali during counter-terror operations

The once proud service which was the envy of most African and Asian nations has now lost most of its prestige and reputation. The glorious days when the Nigerian Air Force operated top-of-the-line aircraft like the Gurevich Mikoyan MiG-21 FishBed, SEPECAT Jaguar Nuclear-capable long-range strategic strike aircraft,  MB-339 Maritime strike and trainer jet, L-29 Delfin Trainer and attack aircraft. Other less capable aircraft (but still formidable at that time) includes MiG-17 Fresco, Ilyushin Beagle medium bomber. All these aircraft mentioned were some of the best at that time.

Additionally, plans to acquire more was in an advanced stage before everything went to dust.

Fast forward several years to the present even though news of several new aircraft to be acquired has been reported by the Nigerian government for the Air force such as the PAC JF-17 Thunder, Textron AirLand Scorpion, Sukhoi Su-25 FrogFoot, Embraer A-29 super Tucano, CASA C-295 transport, modified Boeing Super Puma, Sukhoi Su-27/30, Yahborn Flash UAV e.t.c. An endeavour if carried out would have bolstered the operational capability of the service.

With that said, what was the context for judging the NAF a ‘junk’ service by  Defense Nigeria Blog? Is it solely due to its lack of air superiority fighter jets? Or its lack of power projecting aerial assets?

The question to ask is ‘ Does the Nigerian Air Force fulfil it’s constitutionally appointed responsibility?‘… The primary task given to the NAF includes (but not limited to) the defence of the republic against any threat both foreign and internal without prejudice or favour. This includes the mostly un-glamorous missions like suppressing internal insurrection, Anti-terrorist operations, Maritime and border patrols, anti-piracy, anti-smuggling e.t.c.

Major powerful countries are constantly faced with the threat of national annihilation in an all-out world conflict however, Nigeria is not saddled with that burden leaving much for the likes of the US, Russia, Britain, China, France et al. Unlike what is being faced in Nigeria currently.

Knowing fully well the nature of its environment, is it not more prudent for the NAF to focus more on its internal security matters to fully satisfy its constitutional given mandate?

Throughout history, the NAF has never aspired to be a very large force by the world’s standard preferring a more subtle and specific support role -assisting the Army and Navy. The responsibility for national defence falls in the domain of the Nigerian Army. A de facto knowledge.

In the Nigerian context, the lack of high-end fighter jets has never impeded air supremacy achievement. This has been exhibited in the various aerial engagement the NAF have participated in. From the Anti-shipping strikes in Sierra Leone, the defence of Freetown against rebels in support of ECOMOG troops, the force majeure flights in the Gambia, Anti-terrorist operations in Mali and now the daily deadly air assaults on Boko Haram terrorists.

Although, defence pundits would argue that these feats mentioned above are against non-state actors and countries with nonexistent Air Force. However, most of those forces possessed air denial ground weapons to challenge the NAF’s air supremacy attempts.

Contrary to Defence Nigeria Blog claim, the lack of air superiority jets does not necessarily signal the death of the aerial service branch of the Nigerian military. We have to consider the entire operational doctrine of the NAF as a whole and not just through its air combat dexterity.

It’s is an undeniable fact the NAF has an excellent track record in other areas which are more or less also important in achieving its goals. This includes (but not limited to):

Other endeavours to defend the National territorial integrity against foreign aggression was demonstrated in Operations HARMONY I to IV during the conflict with Chad in the border region,  example occurred in the Bakassi /Cameroonian border in Operation GABAS in 1987 where Cameroonian army troops were pushed back in a three days war.

To complement the lack of aerial air superiority fighter jets, the NAF makes use of the Total Radar Coverage of Nigeria (TRACON) connected to various Nigerian Army Anti-Aircraft artillery to further enhance the capability in protecting Nigeria’s airspace.