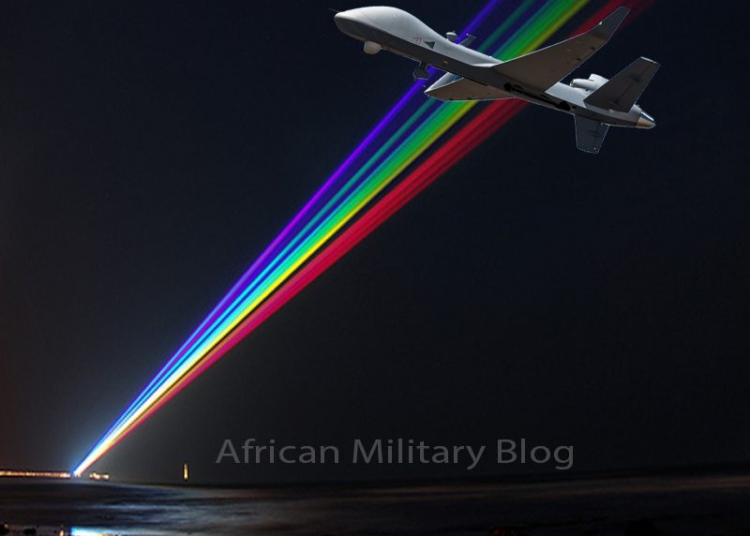 The United States Forces stationed in Djibouti are complaining about been subjected to multiple laser attacks. This has prompted the United States Military through the US African Command (AFRICOM) to issue out notice to its airmen (NOTAM) operating in the area to be “extremely cautious” of what it called  an “Unauthorized laser activity.”

The lasers were detected pointing at the US aircraft from the ground most likely intended to harass or injure the pilots.  In the NOTAM issued, the US Military noted that “There have been multiple lazing events involving a high-power laser in the vicinity of N1135.70 E04303.14. Use extreme caution when transiting near this area,”

The coordinates point to the area close to the Chinese military base -just 7 miles northwest of Camp Lemonnier, the only permanent US military base in Africa which houses around four thousand US military personnel. The US base is used for training local forces and conducting anti-terrorist operations.

Further US investigation reveals that China’s People’s Liberation Army Navy (PLAN) is suspected of operating a high-power laser at the base or on a ship offshore for temporarily blinding or rendering spying equipment ineffective. Ironically, China is a signatory of the Protocol on Blinding Laser Weapons but there have been instances where the country allegedly produced and used the weapon.

Laser weapons have been around for quite some time now even the defunct Soviet Union periodically attacked US Navy pilots with laser weapons mounted on trawlers and warships since the Cold War era. Coincidentally, just a few weeks ago in April, a Chinese company GuoRong Technology completed trials of the new truck-mounted laser weapon system that claims successfully destroyed flying drones.

The video of the successful tests was immediately uploaded to Youtube. In the video, a drone that appears to be the Chinese-made DJI Phantom 3 was shot down from nearly a kilometer away. Nonetheless, this is not the first time China is showing off its high-tech weapons system. At the International Defense Exhibition and Conference one of the world’s largest arms exhibitions where arms manufacturers from all over the world display their latest inventions. Poly Technology exhibited its Silent Hunter Laser weapon which the company claims is the world’s most powerful laser weapon emitting an output of at least 50-70 kilowatts, which would make it more powerful than the 33-kilowatt laser weapon systems (LaWS) currently deployed on the USS Ponce.

The company brags that the Silent Hunter laser is powerful enough to cut through light vehicle armor at up to a kilometer away.

Presently, relations between China and the United States is “shaky” at best with both countries trying to out-maneuver each other especially in the hotly contested South China Seas (SCS) where China is claiming a large portion of the area for itself. As both country are strategic rivals, the proximity of the two base in Djibouti would mostly be used to gather strategic information and data about deployment procedures, force composition and general battle-management technique. Although this would be done quietly as neither side doesn’t want to rattle the proverbial cart.

Djibouti, located at the southern entrance to the Red Sea is a tiny, barren country with a population less than one million. However, the country sits in a vital strategic location, close to the Suez Canal, one of the world’s busiest shipping routes. Troops stationed at the country could reach major conflict zones in Africa and Middle East in just a few hours, for this reason the US routinely conduct aerial strikes in Syria and Iraq from its Djibouti base.

With the high unemployment and poverty rate in Djibouti, the rents the country receives from occupying countries is crucial in economic and infrastructural growth. For example, the United States pays $63 million annually to lease its base, while the Chinese is paying $20 million a year besides the billions they are investing in building a railway, a port, an industrial park, and banks.

This large amount of “foreign investments” in the country has resulted in the government throwing caution in the wind and opening its doors to any country with the financial wherewithal to lease a parcel of land. Countries currently having a base in Djibouti includes: the US, France, Great Britain, Japan, Italian and recently Saudi Arabia and China, while troops from Germany and Spain are hosted by the French.

Presently, it might appear that the Djiboutian government is harnessing its God-given strategic position for the benefit of the country however, defense experts from across the world are describing the move as threading a fine line between “economic development” and “national destruction.” considering the history of the region, which is known to be conflict-prone Djibouti is risking being drawn into other countries’ wars. The country might find itself (even though neutral) making enemies as a consequence of its military guests.

For instance prior to this latest “quiet contest” by China and the US, Japan which has reportedly explored the possibility of expanding its own military presence as a form of counter-balance to China’s influence has once been caught pants down when it sent some members of its elite force’s frogmen aboard a warship to spy on ongoing Chinese military construction.

Another country which has found itself in a position to house a foreign base is Ghana, the US African Command wanted to establish its headquarters on the countries soil but the citizens in a surprising show of solidarity rejected this proposal forcing the country’s president to quickly capitulate or face losing his political standing. The US has been accused of clandestinely positioning itself for a possible future conflict.