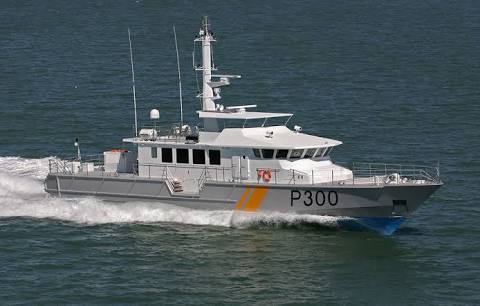 The FPB 110 MKII multi-purpose fast patrol boat features a monohull which improves the vessels performance and durability. the boats superstructure and hulls was constructed using aluminium.

This class of vessels have a length of 35 meters, width of 7.1 meters and draft of 1.7 meters. it is crewed by eleven personnel. the boat can also accommodate a further 6 people.

The Nigerian FPB 110 MK II can be armed with a 20 mm or 30 mm naval gun operated remotely or manually. it can also mount two heavy machine guns to engage speed boats and other surface targets.

The FPB 110 MKII multi-purpose patrol fast boats of the Nigerian Navy can be armed with two heavy machine guns to engage stationary and moving surface targets.

The boats is powered by two MTU 16V2000 diesel engines driving two conventional fixed-pitch propellers with a total maximum power output of 2,000kW each. It can reach a speed of 30 knots and range of 900 nautical miles max. The FPB 110 MK II has a maximum endurance of 5 days.

According to Naval-Technology, The FPB 110 MKII vessel’s antenna mast is equipped with two Furuno navigation and surveillance radars to detect, acquire and track targets at sea, and various antennae to provide communication.

OCEA believes that the two newly delivered boats would be used by the Nigerian Navy in countering maritime insecurity in the Gulf of Guinea region.