The story of a Biafran made weapon, Ogbunigwe rocket and Abagana Ambush.

“In three years of war, necessity gave birth to invention… we built bombs, rockets, and we designed and built our own refinery, and our own delivery systems and guided them far. For three years, blockaded without hope of import, we maintained all our vehicles.

“The state extracted and refined petrol, individuals refined petrol in their back gardens. We built and maintained our airports, we maintained them under heavy bombardment… we spoke to the world through a telecommunications system engineered by local ingenuity.

“In three years, we had broken the technological barrier, became the most advanced black people on earth.”

Those were the last words from the Biafran Supreme Commander which he said during the fall of the resistance. A resistance that ended up as a bloody three years conflict. The Nigerian Civil War (also known as the Nigerian-Biafran War) was a brutal conflict between the Nigerian Military and the Biafran Secessionist. The war demonstrated the ingenuity and innovation of the Biafran Scientists and Technologists. It highlights were the use of indigenous Biafran made weapons such as Unguided rockets, Armored vehicles, Communication devices, portable crude oil refineries, various firearms etcetera.

Not much is said on the mainstream media about the technological gains made by the Biafran separatist forces during the Nigerian-Biafran War. In that conflict, the Biafran people showed resilience, tenacity and motivation throughout the duration of the war even in the face of overwhelming odds.

Being blockaded in all directions- air, sea and land, the Biafran Scientists and engineers went about developing cutting-edge technology to circumvent the siege. Such technical prowess was unheard of anywhere in Africa at that time especially without foreign help.

This article narrates the incident which occurred in March 31, 1968 whereby a barrage of Ogbunigwe rockets were used in great success against a Nigerian Military armored convoy conveying the 2nd Division numbering about 6000 troops. More than a hundred vehicles were destroyed with few survivors. 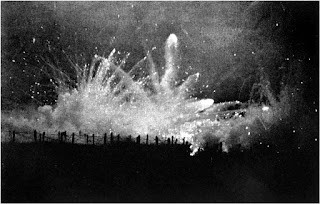 At the beginning of the Nigerian-Biafran War (July-September 1967), before the first shot was fired the newly created Biafran Air Force had complete Air Superiority over the Nigerian Forces by the possession of a single World War II B-29 Fortress Bomber which it commandeered from the Enugu Airport prior to the start of aggression. Stationed in Enugu the Capital, the sole Biafran Air Force B-29 Bomber was used in a ruthless bombing raids against Nigerian targets.

In the height of the war, in an effort to retake strategic locations to cripple the Biafran resolve, the Nigerian federal troops initiated Operations TAIL-WIND with the primary objective being to  drive through the resistance and carved the new nation into two. A secondary objective is to reinforce the 3rd Marine Commando that have been surrounded and cut off deep inside the Biafran lines.

At the Nigerian side, the chances of conducting a military campaign without proper air cover against a determined foe was downright hopeless an unachievable task. It’s national unity was hanging on the balance, something had to be done quick.

The Nigerian Air Force then approached its allies at the time (Britain, Russia, France, Egypt) who then supplied sophisticated fighter jets and bombers like the Mikoyan Guerevich MiG-17 Fresco, Ilyushin Il-28 Beagle medium bombers to the Nigerian Air Force and crewed by Egyptian pilots.

The air superiority enjoyed by the Biafran Air Force has been shattered. The Nigerian Air Force fighter jets began its own ruthless campaign against the Biafran forces and population. In an attempt to blunt the edges of the NAF’s blistering attacks against Biafra, the latter’s High Command then established the Biafran Research and Production Group (RAP) headed Dr. Felix Oragwu a nuclear physicist.

Prior to the Nigerian Air Force deploying the fast MiG-17, the Biafran Air Force Headquarter located in Enugu Airport was defended by a sole 40 mm Bofors anti-aircraft artillery – an antique scrapped up from WW II military surplus. The Bofor gun was quickly outgunned by the Nigerian Air Force fighter jets. So, a new air defense mechanism was needed as soon as possible.

This prompted the Biafran Air Force Commander of  Enugu HQ to charge the Science and Technology Group under the BAP to come up with an anti-aircraft weapon capable of stopping the MiGs. During the discussion, a number of suggestions was made with the most suitable being propelling debris and shrapnel in the path of the incoming jet in the hope of making the jets in jest the materials into its engines in order to damage or destroy it. A very ambitious endeavor at that time.

The idea is reminiscent of the modern day ‘pre-fabricated’ warhead used by most anti-aircraft missiles or Surface-to-Surface ballistic missile warhead. Ogbunigwe rocket was based on the physics of the “ Monroe effect“ – Shaped-charge. It killed and maimed by wave effect percussion and dispersal of shrapnel.

After the deliberation, an Agricultural Engineer by name William Achukwu a member of the Science and Technology Group proposed a metallic bucket-like device with rocket propulsion at the base. A prototype was quickly designed enthusiastically with trials beginning soon afterwards. The Ojukwu Bucket as the new device was called showed remarkable results, it reached a height of 1000 feet easily. A range optimized for air defense since the Nigerian Air Force fighter jets usually fly at that height.

In October 1967, when Enugu fell to the Nigerian troops, the troops were thundering straight down to Onitsha a very strategic key point in the Biafran defense. Through the old Enugu-Awka-Onitsha road. The well armed, heavily equipped federal troops, with their superior fire power, encountered a battalion of poorly equipped, out-gunned and virtually exhausted Biafran troops at the Ugwuoba Bridge, few kilometers into Awka.

However the Biafran troops were equipped with some of their Ojukwu Bucket air dust mines. Unable to withstand the superior firepower of the federal troops, they began to retreat. However, their commander ordered them back and asked that the Biafran made weapons be used in a flat trajectory as opposed to its natural elevated firing position against the approaching Nigerian troops.

The result was beyond anything anybody could imagine!! A tornado of dust, stones, fire and water from the nearby river was thrown up in a large terrifying cloud which sewn chaos and commotion amongst the Nigerian soldiers. The Nigerian troops quickly retreated leaving their dead behind. The next morning, after the cloud of dust has cleared the Biafran population was called to clean up the dead which was numbering in the hundreds. A name was coined for the Ojukwu Bucket -OGBUNIGWE which means ‘mass killer’ in Ibo language.

OPERATION TAIL-WIND
In March 31, 1968 In an attempt to link up with the embattled 3rd Marine Commando that was entwined in a bloody and savage hand-to-hand battle with the Biafran 14th Division, the Nigerian 2nd Division hastily assembled a large force without doing preliminary reconnaissance, Surveillance or Intelligence mission.
The officer in charge  Col. Muhammed assembled and deployed, a convoy of 102 vehicles and four armoured cars to facilitate this plan.

However, the Biafran Secret Intelligence discovered the plan and quickly notified the High Command which hatched a counter-plan. A 700-man team led by Major Jonathan Uchendu would ambush the invading force at a critical junction at Abagana in the Enugu-Onitsha highway. 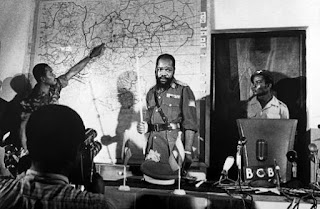 Although, this area (Onitsha) has been captured and recaptured by both sides numerous times in the past immediate past year such as when the Biafrans headed by Major Joseph Achuzie of 11th Battalion and Colonel Assam Nsodoh of 18th Battalion initiated a pincer attack to flush out the Nigerian troops burning and looting the Onitsha market October 1967.

Enroute to their destination, the Biafran ambush party unleashed a barrage of Biafran home made OGBUNIGWE rocket artillery weapons on the unsuspecting Nigerian forces which tossed the vehicle high up into the air. Refuelling vehicles exploded and burnt many infantry units. 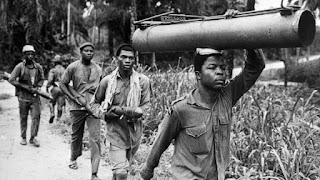 A total of 6000 Nigerian soldiers lost their lives with 106 vehicles in the convoy destroyed. The 2nd Division commanding officer General Murtala Mohammed was relieved of duty and never commanded a division again. The ambush halted the Nigerian advanced, and doomed the 3rd Marine Commando’s prospect of getting reinforcement.