The Desert in Libya that turns all military gears into scrap 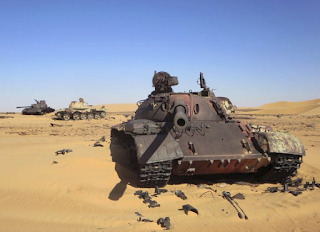 For all the talk of sophistication in military gears, very few military powers have ventured into the scourching Libyan desert heat and come out unscarth. As the sun comes up, the desert temperature can rise to a staggering 50 degree celsius while at night it can drop well below -9 degree celsius.

The desert has been well known for centuries by the local tribesmen who brave such inhospitable climatic conditions, with no river or any other water source for miles in and around desert no one is expected to attempt to cross it without special modern gears and survive.

With menacingly sounding names like ‘The Black Desert‘, ‘Red Desert’ and ‘The Great Sea of Sand‘, one would expect that the desert didn’t just get that kind of name by chance. For simplicity sake, we will refer to the Libyan desert as the Black Desert (simply because it sounds more scary). The Black Desert is always dry, barren and the rain never falls… ever!! such climatic conditions has made the desert one of the most harsh and inhospitable place on Planet Earth over time and the punishment it dishes out to both man, beast and machine who dares venture into it is indescribable.

It got its iconic name due to some area having a blackish-grey hue as a result of the sun scorching the earth. 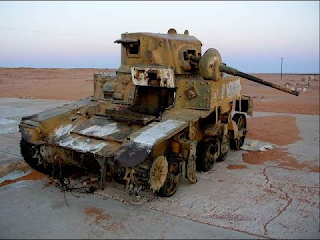 As the saying goes, “As long as man exist, War will also exist“. Man and war are inseparable despite the reputation of the desert, brave men has fought in this terrifying environment for centuries. For example, The ancient Roman warriors fought for the control of this desert and placed it as the Italian colony of Libya.

Prior to the World war I, during the Italian-Turkish war in 1911, both side fought for control of this area for 20 years until the Italians manage to defeat the Ottomans but with a great loss to man and materiel which was largely caused by the desert’s harsh climatic conditions.

The desert has continuously witnessed several warring parties from the world war II down to the present year. Further down history line, the newest additions seems to be from the NATO-led intervention to oust Housain Gadaffi. 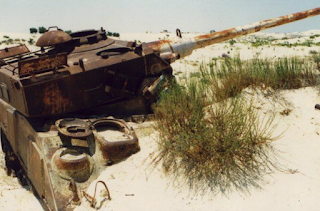 Equipment that can be found strewn through out the desert are dated as far back as the Italian offensive and occupation down to the North African Campaign during World War Two followed by the post war revolution. Relics present there includes, Main Battle Tanks, various Artillery piece, APCS, Mines, Mortars and even whole aircraft has been found although most has been covered by the ever moving sandstorm. Due to the climatic conditions such as no rain and dry humidity most of the equipment are still relatively intact.

As a result of the harsh economic condition in Libya, the tribesmen economic activities is centred around selling off this ex-military stuffs from the desert to willing buyers for little price or sometimes non-currency objects and even food items especially bacon.

Tourists and buyers are severly warned not to touch relics dating during the World war II since the Germans were known to booby trap them. A social media commenter who went there in the ’60s decided to open the hood of one of the vehicle and discovered that a hand grenade was wired to the hood to explode when opened. Luckily for him, the wire has rusted through and severed the makeshift IED thus sparing his life.

The Libyan Military is currently splintered and the country is in disarray.