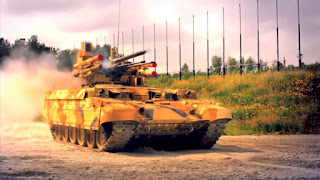 In a bid to modernized its military force, The Algerian Army is undertaking a radical acquisition spree. In recent time, they (the Algerian Military) has bought modern Sukhoi Su-30 fighter jets and T-9O main battle tanks (MBT) and now they are looking to add the BMPT-72 Terminator-2 Tank Support Combat Vehicle (TSCV) to its already formidable inventory. According to an online media Menasdefense who reported on September 9, tha Algerian Military is looking to buy about 300 Units from Russia, a deal signed in 2016 with delivery to begin in 2017 up-to 2018.

The  Algerian Army would most likely pair the Terminator-2 with it new T-90 main battle tank it just acquired from Russia recently.