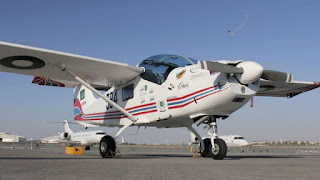 In a bid to re-position itself to better carry out it’s mandated duties, the Nigerian Air force has taking delivery of the first batch of four Super Mushshak aircrafts gifted to the force from the Pakistani Government to aid in the flight training of aircrews. The four new Super Mushshak came at no cost to the Nigerian Government.
According to the photos published by the Director of Public Relations and Information, Air Commodore Olatokunbo Adesanya, the partially disassembled Super Mushshak aircraft could be seen been unloaded from a large military transport plane in Kaduna Air Force Base 401 Flying Training School. 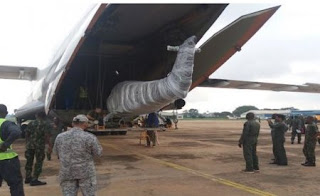 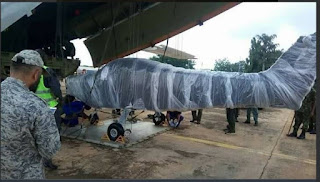 He further stated that the aircraft would immediately commence flight operations after being re-assembled. Recall that the trainers were initially inducted into service last year december 5. The Super Mushshak can be utilized for a variety of roles such as light transport, Armed Reconnaissance, Close Air Support (CAS) and Ab initio training.
In a related development, Pakistani Aeronautic Complex the co-manufacturer of the JF-17 Thunder Multi-role Fighter jet just posted earlier this week that it will begin delivering Nigerian Air Force’s order for its jet by next week. The Nigerian Air Force placed an order for two squadrons of the JF-17 to replace it’s aging fleet of eleven Chengdu F-7 fighter jet (a Chinese clone of the MiG-21 Fishbed).
The arrival of the JF-17 Thunder is much anticipated because it would boost the country’s fledgling air defence posture while assisting in combating the Boko Haram insurgents. 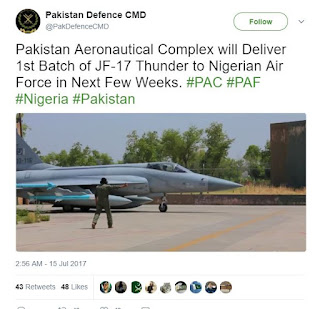