A large number of aircraft were destroyed while some others were severely damaged!

The Chadian Military was just dealt a serious blow as some of its aircraft parked at the N’Djamena airport was damaged by storm. The incident occurred at 1st of July at the countries capital with strong wind and rainfall which damaged most of the buildings and hangers in the airport. A large number of aircraft were destroyed while some others were severely damaged this was according to photos released by a Chadian local online media Tchadactuel.
This incident is quite unfortunate for the Chadian military considering that they operate a small Air Force with very limited capabilities. In recent times the Chadian Air Force has been grappling with sever funds shortage to acquire more modern platforms and has been forced to make do with older planes in small numbers. According to the photos, the Air Force sole MiG-29 Fulcrum fighter jet was seen covered in debris as the building collapsed- it appears to have suffered minimal damages. However, other aircraft was less fortunate. The air force only PC-12 was seriously damaged lying on its fuselage with its landing wheels completely gone. Two Su-25 Frogfoot aircraft were on the ground facing upward entangled in debris but also appears to have suffered only minor damages. The three AS350 series Fennec helicopter was the worst hit of all as one of them was lying on it side with its tail-boom and main rotor destroyed.
Tchadactuel reports that only a handful of aircraft manage to survive the storm unscarth such as the President’s Boeing 737, one An-26 transport and France Air Force C-135FR and CN235 which must have been provided more substantial protection shelter. The Airports buildings and infrastructure may have suffered varying degree of damages- tree branches and building debris is seen littered around the hangers and apron.
This incident if not quickly rectified could greatly affect the country’s ability to conduct aerial operation as the country is currently conducting military offensive against the deadly Boko Haram sect which has killed hundreds of Chadian citizens. Air platforms are critical and vital to the security of the country, other aircraft was not accounted for and their fate is still unknown such as: 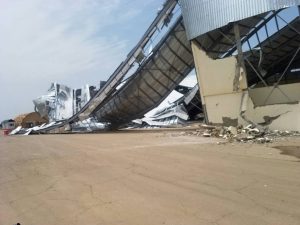 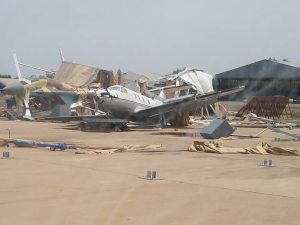 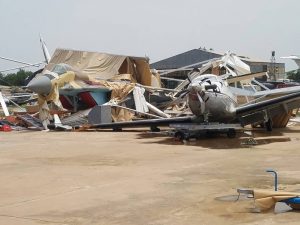 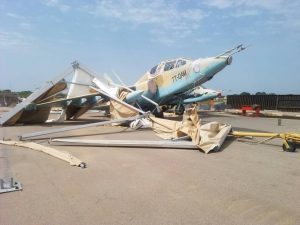 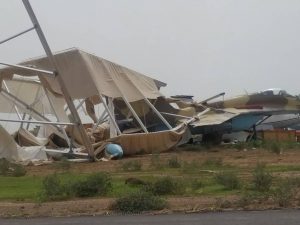 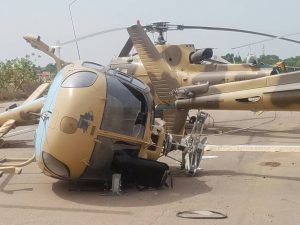 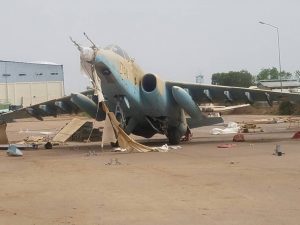 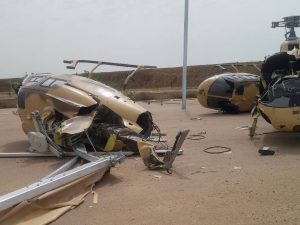