Egypt media has reported that the military is currently field testing a new attack helicopter — the Kamov Ka-50 ‘Black Shark’. According to the source, Egypt authorities received a total of four units of the attack gunship which are already in-country.

The Ka-52 Alligator is a single seat powerful gunship which is very fast and agile.  Built in Russia by Kamov design bureau. It has a distinctive coaxial rotor. It was designed in the 1980s It is can be used as a heavy armed scout helicopter. The helicopter has the ability to fire precision guided munitions which will be a force multiplier as the country is currently battling the deadly sect Islamic State. 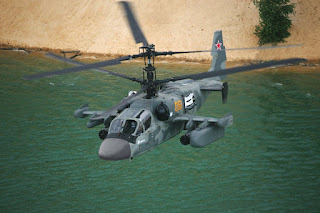 On March 31, the Russian Defense Ministry published a video showing combat use of Ka-52 attack helicopters. In the video, helicopters fired anti-tank missiles against terrorists’ armored vehicles near Palmyra. Watch the video below.