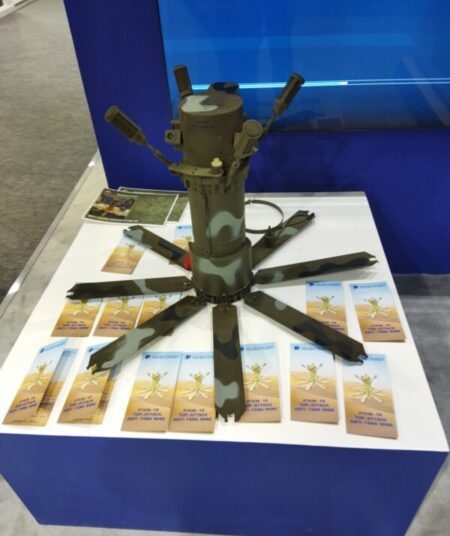 Russia for the first time has unveiled its next-generation smart anti-tank mine built specifically for export at the EDEX 2021 exhibition in Cairo, Egypt.

Rosoboronexport showcased the PTKM-1R top-attack anti-tank mine during the EDEX. The system is intended to detect enemy armour and land combat systems.

The PTKM-1R top-attack anti-tank mine aims exactly at the least protected part of a tank or a self-propelled gun – its roof, and is capable of selecting what armoured vehicle to hit, it chooses only those equipment that meet the specified parameters in terms of noise and ground vibration.

The smart mine is optimally installed at a distance of 5 to 50 m from the probable route of the target making it quite difficult to detect. When the target comes within 50 m radius from the mine, the seismic sensor commands to launch the combat element. The combat element follows a ballistic trajectory and it’s sensors – thermal and radar – scan the earth’s surface. When the sensors detect the target the warhead is detonated and strikes the target from above.

Weighing about 19.9 kg, the PTKM-1R is fitted with an explosive warhead of 2.8kg, and can penetrate armour of at least 70mm. The hardware is designed with a self-destruction time of 1 to 10 days.

At EDEX 2021, Rosoboronexport showcased their products for all services of the armed forces in Hall No. 4 of the Egypt International Exhibition Center, and exhibited 350+ products, including scale models of the Yak-130 combat training aircraft, Mi-35M transport/attack helicopter, Ka-31 radar picket helicopter and the Rubezh-ME coastal defense missile system.