Mi-28NE Havoc attack helicopter to debut at the Dubai Airshow 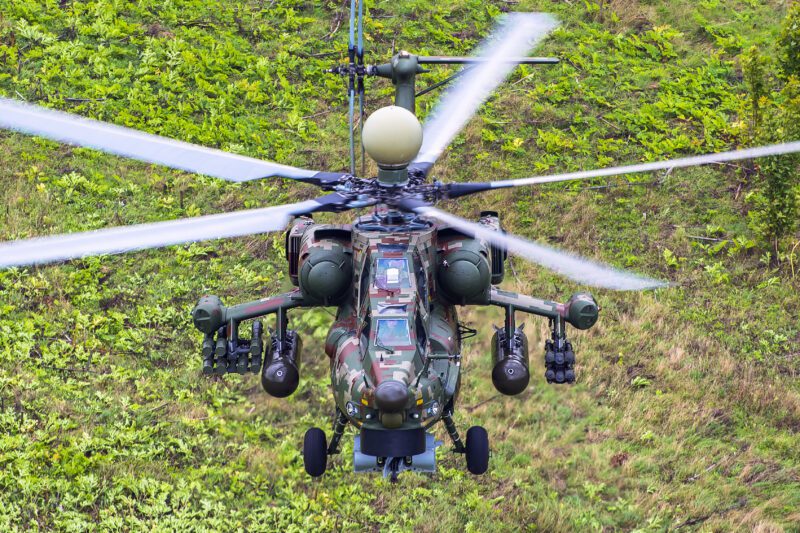 The Mil Mi-28NE “Havoc” attack helicopter, serially produced by the Russian Helicopters’ Rostvertol company, will be for the first time exhibited at the Dubai Airshow 2021 and will perform the flights there, it was officially announced.

As with the MAKS 2021 airshow in August, the Mil Mi-28NE Havoc gunships is expected dominate the sky over Dubai. Russia’s MIL helicopters and Rosoboronexport will showcase the Mi-28 along with the Kalashnikov’s Vikhr guided missile and other the aerial bombs.

The Mi-28NE is designed for fire support of the forward land troops and when deployed as a part of anti-mechanized defence, for destruction of armored vehicles, striking low flying and low-speed air targets, carrying air reconnaissance as well as providing target designation to combat helicopters and fixed-wing aircraft.

Leveraging on the experience of military conflicts of the recent years, which has proven that attack helicopters are deployed in close contact with the enemy. The extensive application of the helicopter in local conflicts made it possible for the customers to develop new requirements for the Night Hunter.

The other valuable advantages of the Mi-28NE include all-weather and round-the-clock combat application capability and a fire power.

Russian Helicopters is one of the most prominent players in the highly competitive rotorcraft market, and has dominated the market, and according to Mordor Intelligence, is considered the number one due to the procurement of it’s attack helicopters on a large scale around the world.

Countries in Africa such as Egypt, Algeria, and Nigeria are focusing on counter-terrorism and ensuring the security of borders. Thus, deploying several attack helicopters equipped with advanced armaments in the affected area is preferred over fixed-wing aircraft.

As a proven platform, the Night Hunter has already taken part in several full-scale combat operations. Apart from destruction of armored vehicles and militants’ manpower the Mi-28NE provided fire support in combat operations in urban terrain and traced insurgents’ group and individual vehicles.

Today Mi-28NE is becoming more and more widespread. The main customers of the Mi-28NE are foreign MODs. The Russian-made helicopters are traditionally of the greatest demand in Africa, Latin America and Middle East, also in the Asian-Pacific region.

The Mi-28NE with dual control system being already operated by the Russian Army possesses all the functions of the attack helicopter and yet significantly simplifies the training process for military pilots who need flying practice with Night Hunters. Besides in combat operations in case of emergency the aircraft control can be taken by the second crew member.

In an interview with The Red Star newspaper, Major Evgeny Seelev, Russian Aerospace Forces flight commander, while describing his Syrian experience specifically emphasized the night vision capability of the helicopter.

The Mi-28NE is also equipped with multi-cyclone dust protection devices with a new air purification principle and high dust-removal effectiveness. Multi-cyclone dust protection devices ensure extraction of sand, dust and foreign particles from air coming from the atmosphere and supplied to engines during taxing, take-off, landing and hovering over dusty areas; this prevent erosive deterioration of engines gas-air flow duct. This is of special importance for African countries.

The Russian media also reported, that the Mi-28NE helicopter can interact with drones and operate them remotely.

As a leader in the international defense market, Rosoboronexport has over the past two decades achieved strong results in promoting products manufactured by domestic enterprises, including those affiliated to Rostec.

Over the past few years, Rosoboronexport has offered and successfully delivered more than 850 helicopters worth about $20 billion to more than 35 countries.

In May 2021, Rosoboronexport JSC invited representatives of different levels from more than 50 countries to the 14th International Helicopter Industry Exhibition (HeliRussia 2021), which was held at the Crocus Expo International Exhibition Center in Moscow.