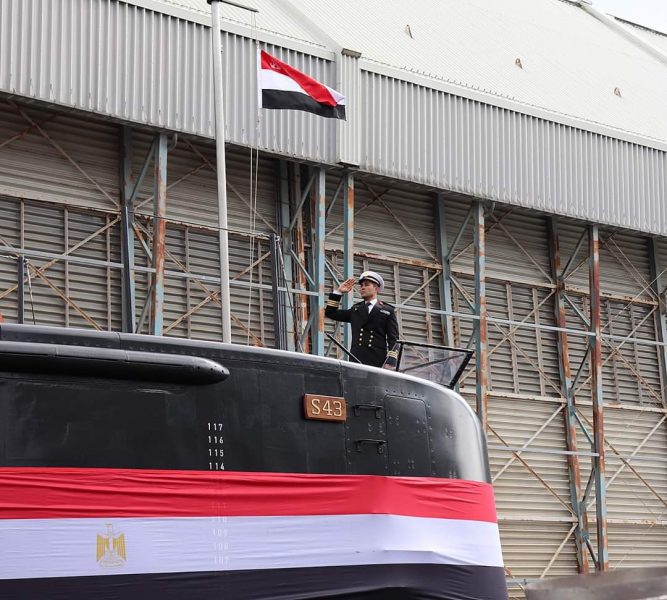 The Egyptian navy received the third Type-209/Mod 1400 submarine (S43) on Thursday, 9 April. The submarine is a part of a two-deals signed with the German ThyssenKrupp Marine Group in 2011-2014 to purchase four Type-209 diesel-electric attack subs, as part of the expansion plan of Egypt’s Navy.

Spokesperson for the Egyptian Armed Forces Tamer al-Refaey said that Egypt received the submarine after the submarine’s technical and specialized crews completed simultaneous training in Egypt and Germany.

Submarines is an essential part of Egypt’s military strategies, since the last decade, Egypt has taken a number of steps to improve the extent of its naval strength especially in underwater domain.

Traditionally, submarine warfare has been Cairo’s Achilles heel, as clearly witnessed during the Six-day and Yom Kippur War. Both Egyptian and Israeli warships attempted to intimidate each other throughout the war, but did not engage each other.

It features recent technology, extraordinary battery payload and low signatures. The class can be armed with a variety of torpedo.

With the new Type 209 in place, Egypt will have one for maintenance, one for training, one ready to dive and one at sea, an indication of a significant upgrade of the Egyptian Navy’s operational capabilities.

Besides the type 209/1400 submarines, Egypt also has four Chinese-built Romeo class submarines which has undergone upgrades such as fire control systems, sonars and improved weapon systems including addition of Harpoon missiles.