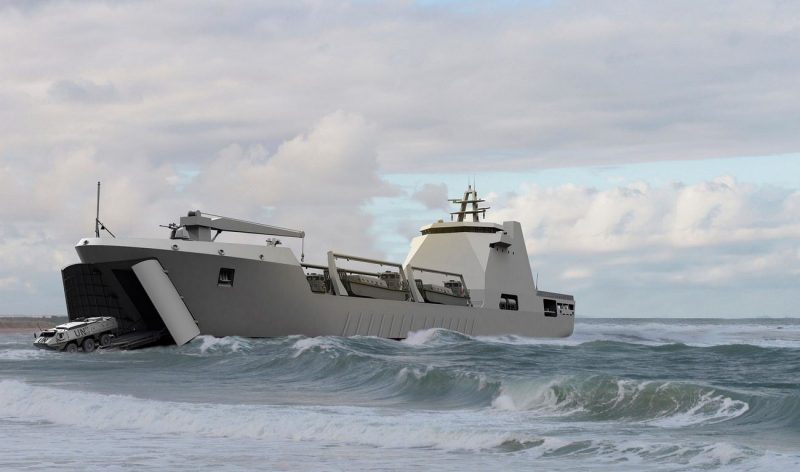 A new landing ship is being constructed for the Nigerian Navy by Damen, this was confirmed on December 9 when the Nigerian Navy released photographs of its commander, Vice Admiral Ibok-Ete Ibas, attending the keel-laying ceremony at Damen’s shipyard in Sharjah, United Arab Emirates (UAE).

The new landing ship tank; an LST 100 class vessel is expected to be completed in May 2020, and will replace the decommissioned landing ships NNS Ambe and NNS Ofiom which were Type 502 amphibious vessels built by Howaldtswerke-Deutsche Werft (HDW) in Germany in 1978.

“These vessels served the Navy meritoriously in the 1980s-90s, playing significant roles during the ECOMOG intervention Operations in Liberia and Sierra Leone, as well as other peace support operations in Lebanon.

“The Nigerian Navy’s acquisition of this LST 100 will certainly go a long way in filling the operational gap created by the decommissioning of the two Nigerian Navy ships. As you may be aware, the bid for this project was highly competitive, as several other shipbuilding companies tendered for her construction. Permit me, therefore, to congratulate Damen Shipyards on winning the bid for this project.”

Previously, Damen Shipyards had already built two tugboats for the Nigerian Navy, the Dolphin Rima and Dolphin Mira, and these are still in service.

“The LST, when completed and delivered, is expected to play crucial roles in the security of Nigeria’s maritime environment and beyond,” Ibas said. “Specifically, the ship will be engaged in the protection of maritime resources and the preservation of law and order at sea, thus contributing significantly to promotion of global maritime commerce and maritime power projection in Nigerian Maritime environment and the Gulf of Guinea at large.

“It is, therefore, my fervent belief that this Shipyard will complete the construction of the LST with all the attention and due diligence that it deserves, to rekindle our historic relationship and pave way for other areas of collaboration in the future.

“On this note, I would like to thank the President and Commander in Chief of the Armed Forces of the Federal Republic of Nigeria, President Muhammadu Buhari, for his untiring support for the rejuvenation of the NN fleet since assumption of office.”

According to Damen, the landing ship vessel has been designed for amphibious operations, transport and logistics but secondary tasks include maritime security operations, humanitarian aid, disaster relief, search and rescue (SAR), operations command, mine counter measure (MCM) and hydrographic survey operations and support.

The Nigerian Navy is looking at acquiring four 17 metre fast interceptor boats by November 2019 and is expecting the delivery of a hydrographic survey vessel in December 2019 (the 60 metre vessel will be delivered from France in 2020).