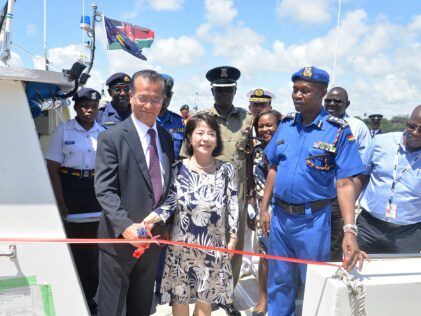 The Japanese Government has donated 17 patrol boats to the Kenyan Maritime Police to help in improving maritime security and the fight against terrorism in East Africa.

The 17 patrol boats were handed over to the Maritime Police at the Port of Mombasa by the Japanese Ambassador to Kenya Ryoichi Horie on 2 October.

“In order to support Kenya’s efforts in strengthening coastal security and anti-terrorism measures, Japan is today handing over 17 Japanese made boats worth about $2.8 million to the Maritime Police Unit as a grant to the Republic of Kenya. In addition, Japan and Kenya have signed another grant worth $2.8 million for the purchase of more patrol boats,” Horie said.

Ambassador also Horie noted that this was an indication of Japan’s commitment to boost Africa’s efforts in attaining peace and stability.

In the recent Tokyo International Conference on African Development (TICAD 7), held in Yokohama, on 28th – 30th of August, 2019. One of the major point was to train at least 1,000 people in three years in the areas of maritime security, port enhancement, and marine resource management; supporting port facilities improvement, ports management, and operations; providing ships and equipment for the region; and participating in the Indian Ocean Commission as an observer.

Kenya has an expansive coastal ocean line of 536 Km in length, and the Port of Mombasa is the maritime gateway for the region’s imports.

Few months back, the United States donated six units of Metal Shark patrol boats to the Kenyan Navy on 27th February 2017, bringing the total number to 10.