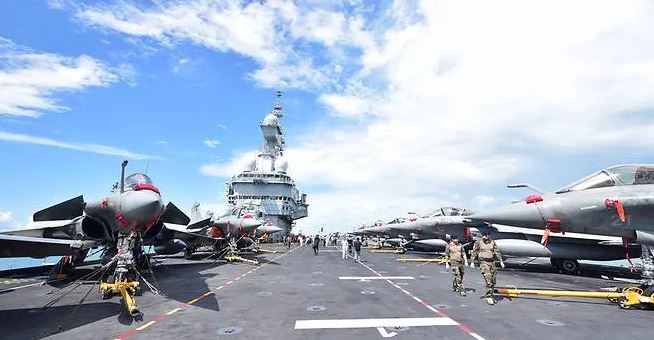 On the morning of Tuesday, May 28, the French Navy aircraft carrier Charles de Gaulle berthed at Changi Naval Base on as part of a five-month deployment from its home port in Toulon, France.

Deployed with it is a carrier strike group comprising Rafale fighter jets, a naval multi-purpose helicopter and two Hawkeye early warning aircraft in its air wing, as well as multi-mission frigates, command and supply ship, and a nuclear attack submarine.

The deployment, dubbed Mission Clemenceau, has taken the French strike group and its crew of 3,200 through the Mediterranean and Indian oceans – two of its areas of strategic interest.

The French strike group spent the first leg of its deployment in the Mediterranean and Middle East in March and April, on the homebound stretch of the carrier strike group’s journey, it will take part in bilateral exercises with the Egyptian military before heading back to Toulon.

Mission Clemenceau underlines France’s interest in these regions and in strengthening cooperation in partner navies.