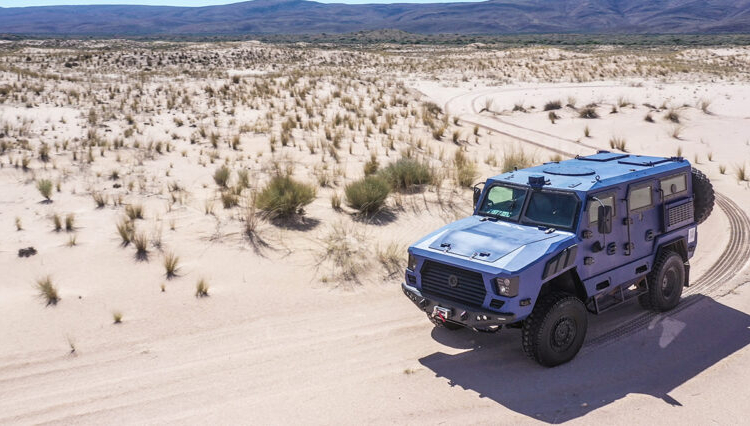 Following the launch of the Maatla 4×4 Light Protected Vehicle (LPV), Paramount Land Systems, a subsidiary of Paramount, the Abu Dhabi-headquartered global aerospace and technology company, has announced that 50% of the newly announced Maatla vehicle contracts have already been completed with deliveries underway to customer countries.

The new multi-role ‘Maatla’ (meaning ‘Power’ in Setswana) was launched at the African Aerospace and Defence Exhibition (AAD 2022) held in September. It was during the expo that Paramount announced the first Maatla contracts totaling 50 vehicles.

In September, Paramount Land Systems, a subsidiary of aerospace and technology company Paramount Group, revealed that it received two orders totalling 50 units of its Maatla 4×4 light protected vehicle (LPV) during the African Aerospace and Defence Expo 2022, that was held from September 21 to 23.

The Maatla and has been designed to address the increasing demand for lighter weight vehicles, while offering advanced capabilities and reconfigurability in the field.

Given immediate interest for the Maatla’s capabilities from various countries, each with diverse requirements, Paramount plans to manufacture and deploy new Maatla variants, with a focus on conducting a range of missions, such as Command and Control, CBRN detection, police and ambulatory, reconnaissance and recovery, and border patrol.

Eric Ichikowitz, Senior Vice-President of Paramount International, stated that, “The immediate reaction and global demand for our newly launched Maatla Light Protected Vehicle (LPV), in this highly competitive marketplace, is a testament to our commitment to mission survivability and outstanding vehicle performance, while addressing the requirements of our customers.

“For over two decades, we have leveraged and championed groundbreaking innovations in amoured vehicle design and manufacture. The Maatla is a product of working closely with our customers to finding solutions to their unique challenges. In matter of a few months we have unveiled a new vehicle, secured orders and now deliveries are in full swing to customers. This is a proud achievement and we are delighted to see the response to the experience we bring in offering Maatla to the world”.

The Maatla has been manufactured on a commercial vehicle chassis, capable of addressing all types of terrain for its nine-crew personnel. The vehicle is fitted with a 2-speed transfer case and 3 differential locks, which allows it to cross almost any obstacle in difficult territories. Its Smart Floor” technology further enables its seating to be quickly removed and the vehicle to be configured for alternative mission requirements, with day/night vision devices and extra sensors able to be fitted to provide 24/7 operability.

The Maatla provides as a minimum, ballistic and blast protections to STANAG 4569 Level 1, and can protect against handguns and other small caliber ball rounds. The vehicle also offers underbelly protection against M26 hand grenades or a blast equivalent.

The Maatla can reach a road speed of up to 100 km/hr, with a cruising range of up to 600 km when traveling at 80 km/hr, and a fording depth of up to 750 mm without preparation. The vehicle can be operated in extreme environments, with temperatures ranging from -10°C to + 55°C, also without any preparation.

Deon Grobler, CEO of Paramount Land Systems, added that: “Our innovative techniques in manufacturing the Maatla Light Protected Vehicle (LPV) are driving the tempo of customer delivery, which is mission critical in our view, given the ever changing and asymmetrical environment which many countries and their armed forces find themselves in. We look forward to the continued roll-out of the multi-purpose Maatla and to the development of its mission specific variants to meet our customers evolutionary requirements”.