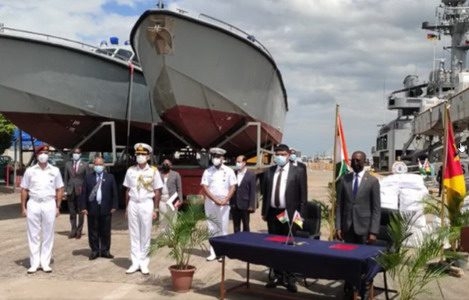 The two boats which are the Solas Marine fast interceptor craft were handed over during a port visit by the tank landing ship INS Kesari.

The Indian Navy has handed over two Solas Marine fast interceptor craft to Mozambique and provided military training during a port visit by the tank landing ship INS Kesari.

The Solas Marine fast interceptor craft are built in Sri Lanka, and are 16 meters long, equipped with Water-jet propulsion which gives a top speed of 45 knots and a range of 200 nautical miles at 12 knots.

The class are armed with machineguns and feature bullet-resistant cabins.

These new vessels will add to the small number of patrol crafts in service with the Mozambican Navy.

This recent delivery is part of India’s drive to promote International relations with nations along the India Ocean route particularly to counter growing Chinese influence. It is not the first time India is handing over patrol boats to Mozambique.

In July 2019, two Indian-made L&T-class fast patrol and interceptor boats for coastal surveillance were given to the Mozambican Navy.

The boats were handed over during a three-day visit to Mozambique by Indian Defence Minister Rajnath Singh. A ceremony was held at the Mozambican Naval Headquarters.

In August 2020, terrorists affiliated with the Islamic State and al-qaeda sank a French-made HSI32 High-Speed Interceptor boat of the Mozambican Navy during attacks on Mocimboa da Praia town.

The HSI32 Interceptor boat was attacked with rocket propelled grenades when it was defending the MdP port.