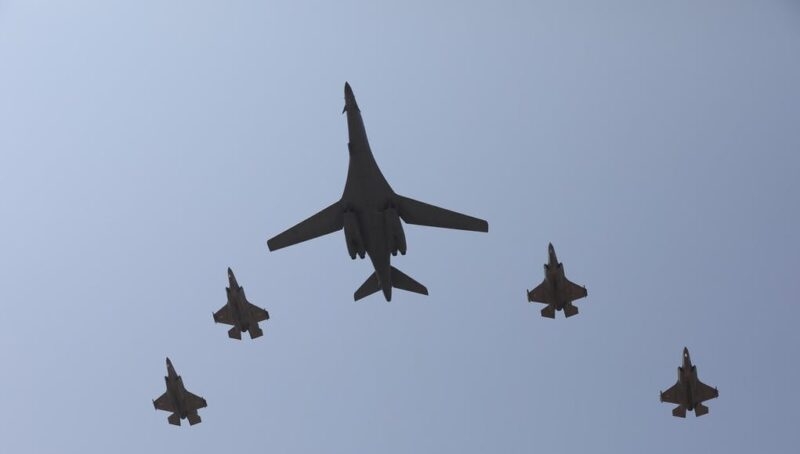 The fly past was part of an exercise involving United States Air Force B-1B Lancer bombers that were conducting a presence patrol mission in the region.

“Today’s bomber task force mission served as a visual representation of the international participants’ collective commitment to stability and security in the Horn of Africa,” said Major General Gregory Anderson, US Africa Command Director of Operations. “And it further demonstrates Djibouti as a leading security partner in the region.”

The aerial activity began mission from Royal Air Force Fairford, UK, provided an opportunity for the aircrews to work with international forces aboard the carrier strike group and those assigned to Camp Lemonnier, the US’s only enduring base in Africa. The mission also exercised the US aircrews’ ability to operate in and through a variety of airspaces, US Africa Command (Africom) said.

“For the fly past the U.S. strategic bombers were joined by the 617 Squadron F-35B Lightning’s, French Mirage 2000s based in Djibouti and US Marine Corps F-35Bs that are also currently embarked aboard HMS Queen Elizabeth. Prior to the fly past the B-1Bs, from the 9th Expeditionary Bomb Squadron based at Dyess Air Force Base, Texas, worked with U.S. and French joint terminal attack controllers to carry out a simulated close air support strike at a range in Djibouti. The U.S. Bombers were then joined by the other jets for the fly past.

After flying more than 7 000 nautical miles to reach Djibouti, bomber aircrews worked with US and French joint terminal attack controllers to provide simulated close air support at Djibouti’s Grand Bara Range and went on to execute the low approach above Camp Lemonnier joined by the six fighter aircraft.

The fly past was watched by around 200 senior leaders and guests representing Djibouti, France, Japan Italy, Spain, the U.K. and the U.S. who came together at the invitation of the US Combined Joint Task Force-Horn of Africa. The visitors in addition to witnessing the flyover, also saw a variety of interactive and static demonstrations designed to showcase the combined military strength present in Djibouti; recognising the shared partnerships, history and commitment to peace of the participating nations.”

“I am delighted that the UK’s Carrier Strike Group is able to participate in this event, it further demonstrates that the Strike Group and this deployment is truly international by design. The ability to operate seamlessly with our allies shows that we are stronger together and underpins stability and security within the region.”

“Celebrating together this allied appreciation day is the symbol of our mutual involvement for peace in Horn of Africa, as in other parts of Africa, particularly in the Sahel,” said Air Division General Stéphane Dupont, Commander, French Forces in Djibouti. “Our action here in Djibouti is paramount for regional stability and contributes to the strengthening of the cooperation amongst our countries.”