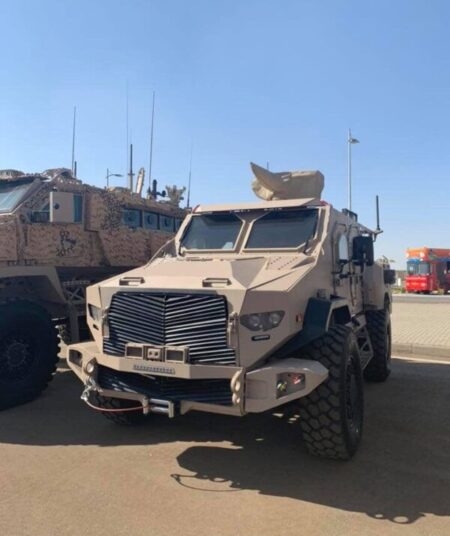 During the opening ceremony, an Egyptian-made IFV Sinai-200 and ST-500 were displayed alongside several other locally made equipment.

During the event, Egypt’s officials disclosed that the north African country will begin mass production of the ST-500 LTV and the Sinai-200 IFV this year.

IMUT specialises in the design and integration of vehicle systems and is now based in New Cairo, Egypt.

The 4×4 ST-500 armoured vehicle was showcased for the first time at the inaugural Egypt Defence Exhibition (Edex) in Cairo last year.

The 4×4 vehicle has armour protection up to CEN Level SR6/SR7 and is available in several variants, including ambulance and fire support.

Also, the ST-500 is 5.65 metres long, is 2.4 metres wide and 3.15 metres high. It weighs 8 000 kg and can carry 2 500 kg of payload. In it’s standard configuration, the ST-500 can carry seven people including a driver, commander and five passengers, while the ambulance version can carry three crew and two stretcher patients.

On the other hand, the Egyptian Sinai-200 infantry fighting vehicle (IFV) appears to be an upgrade for the Russian BMP tracked armoured vehicle.

It was first unveiled in February last year by the Egyptian President Abdel Fattah al-Sisi during the inauguration of a number of new factories operating under Abu Zaabal Company for Specialized Industries, also known as “Military Factory 300.”

The Sinai-200 IFV provides protection of STANAG4569 / Level4B protection against mines. It is equipped with a 12.7mm remote control weapon station (RCWS) as well as a Q-Net to provide protection from RPG attacks.

With this new ST-500, ST-100 and Sinai-200, Egypt once again displays it’s ability to develop and deploy a wide range of armoured vehicles. Early this year, the Egyptian Army started the deployment of the Egyptian made Sinai-200, ST-100, ST-500 on Sinai region.