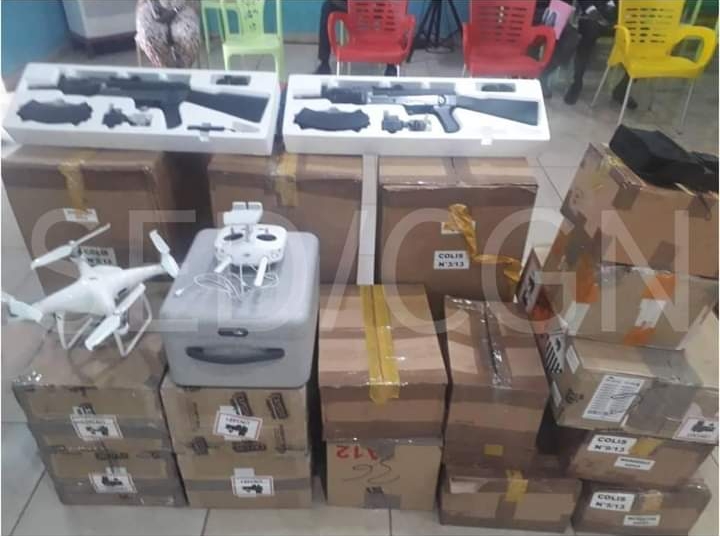 France has donated equipment to the Gendarmerie of Cameroon, including a DJI Phantom drone, JG Airsoft AK-rifles (training), body armour, and other materials.

The official handing over ceremony of security equipment took place on 28 May 2021 at the conference room of the High Command for Gendarmerie Schools and Training Centres (CECIG).

Chaired by the Brigadier General, Commander of the First Gendarmerie Region, on behalf of the Secretary of State to the Minister of Defence, in charge of the National Gendarmerie.

The Internal Security Attaché to the French Embassy in Cameroon, Colonel Christian BROUDIN, was the representative of France.

The donation consists of 100 bullet-proof jackets, 50 heavy helmets, 6 pairs of binoculars, four DJI Phantom drones and 20 AK47 training rifles with their accessories, the equipment donated will be used to fight against terrorism.

It forms part of the excellent security cooperation between the French and Cameroonian Gendarmeries says Colonel Christian.

The airsoft training rifles fires plastic pellets, and are likely made by Jing Gong or an equivalent Chinese factory.

For quite some time, France have been a major arms supplier to the countries in the region.

Cameroon defence forces have been battling terrorism in its northernmost region as well as separatist movements in the south.

Cameroon have been accused of committing human rights violations such as torture, crackdown on political opponents as well as making arbitrary arrests.

Even with this allegation, the French Government disclosed that it will continue its current military co-operation with Cameroon even after the United States withdrew some military assistance to Cameroon.

France has continually supported the Paul Biya regime by donating several military hardware including the ACMAT Fortress armored vehicles to the Cameroonian Armed Forces as part of efforts aimed at combating the Boko Haram insurgent group.