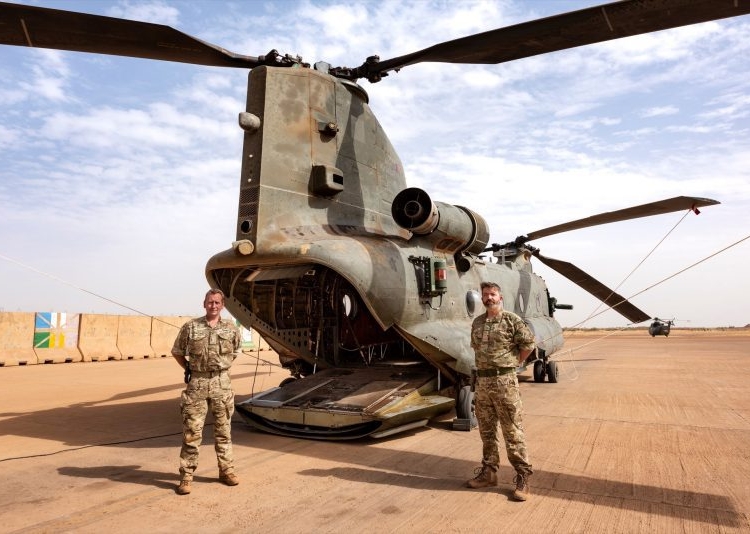 Three RAF Chinooks deployed to Mali under the UK’s ‘Operation Newcombe’ has been placed under a new British National Component Commander.

Commander Colin Kiernan, of the Royal Navy, has taken over from the Army Air Corps’ Lieutenant Colonel Steve Brining after a handover ceremony at Gao Airbase in the west African country.

Three RAF Chinook detachment in Mali are in support of ‘Operation Barkhane,’ a French-led counter-insurgency operation, providing heavy-lift capability and allowing the operation to extend its range.

Cdr Kiernan took charge of the detachment that includes 1310 Flight RAF which operates three CH-47 Chinook helicopters under Operation Newcombe, a support force for the French-led Operation Barkhane. The Chinooks helicopters are flown and operated by aircrew from the RAF’s 27 Squadron out of Gao.

Speaking after his appointment, Cdr Kiernan said: “Command of the CH-47 contribution to Op Newcombe is a privilege and honour of no equal, for me.

“I have been handed a highly motivated and capable team of RAF and Army personnel who, despite the environmental and operational challenges are always ready to deliver.

“Our continued deployment here demonstrates Britain’s commitment to working with France and other allies to address shared security challenges in our host nation Mali and the wider Sahel, a region affected by instability and extremism.”

Since their deployment six months ago, the Chinook detachment has played a pivotal role in the French-led Operation Barkhane, the helicopters have delivered nearly 700 hours of operational tasking, including delivering 400 tonnes of freight and over 3,500 personnel across the area of operations.

Outgoing commander, Lt Col Brining, said it had been an “immense privilege” and thanked personnel for their efforts.

For years, Mali has continued with struggles against Islamic extremism. British soldiers are also in Mali to support the United Nations’ Multidimensional Integrated Stabilization Mission (MINUSMA), the troops provides enhanced reconnaissance capability to the mission as proposed last year.

About three-hundred British troops began arriving in Mali in December for what is described as the UN’s most dangerous peacekeeping mission. Majority of the 300 personnel were primarily drawn from the Light Dragoons, the Royal Anglian Regiment, and supported by specialist trades from across the Armed Forces.

Although, the deployment initially suffered some delay due to logistical constraints, which was later resolved. The delays were caused by challenges in building troops camp sites, arranging commands, as well as moving equipment to Mali

In February this year, the Commanding Officer of the UK Task Group in the country said the troops were ready to start “operations directly contributing to the UN”.

Besides the Chinook helicopters, the Royal Air Force also dispatched a C-17 Globemaster III transport aircraft to Gao, Mali in support of Barkhane.