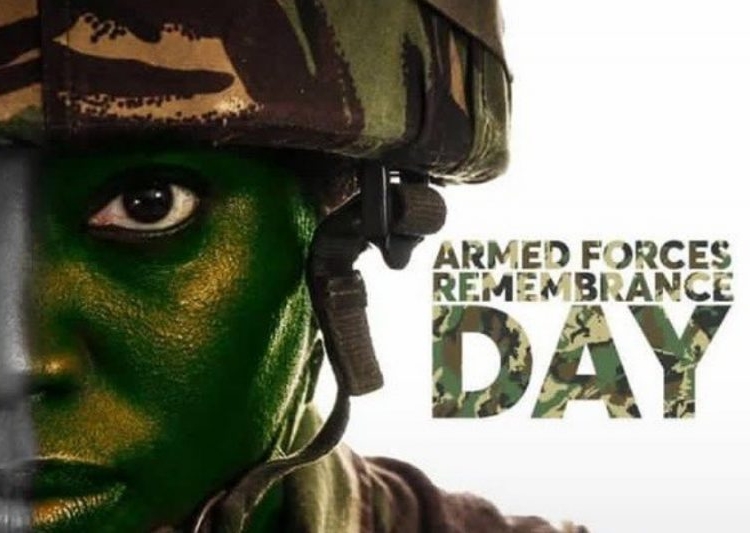 The Nigerian Armed Forces Remembrance Day holds on 15th January every year, a special day set aside to remember service personnel that paid the supreme sacrifice during the 2nd World Wars, the Nigerian Civil War and other past, and present operations within and outside Nigeria. Religious services to commemorate the remembrance day are held on the last Sunday for Church services and last Friday for Juma’at prayers which are preceding to the D-day when both National and Regimental Colors are carried on a colorful ceremonial military parade.

Nigerians within and those in diaspora do celebrate and remembered the sacrifices of our servicemen and women including the fallen heroes who fought selflessly and gallantly for a peaceful and united Nigeria. They speak to give silence, they train to get fit, they kill to live, they live to kill, confidence and respect is not sold in the World Trade Centre. Who else could challenge armed enemies in the face of death? if not our gallant troops, they do not see death as threat, it’s an obstacle they always cross so as to be a valiant compatriot whose name will never be washed away in the face of a million flood. Their family and friends are far away from them. What else could be so honourable than to defend your Fatherland. They suppress those who oppress, to impress the depressed, defend the defenseless. Field they sleep, sea they sail, sky they soar, to tread on the wings of the octopus and give peace to our people. They will fight till they die, sail till they sink, soar till they crash to restore anomie to normalcy. The Nigerian tri-service, Army, Navy & Airforce, stand as one in togetherness for the most populous black nation.

However, the Nigerian Military need more public and media support in the ongoing counter insurgency war in the North-East, militancy in the  South-South, banditry in the NorthWest zones as well as other internal security operations across the country. The recent giant strides of the military has rekindle our hope in our armed forces in defending the defenseless citizens against insecurity and threats to national security. We must be guided to understand that the nature of terrorism does not give rooms to some of the uninformed assertions, sentimentalisation and politicisation that we are making online and offline. We need to encourage our gallant military to do more in mobilising greater force, sustainable attacks, proactive engagements and decimation of these merchants of death called BokoHaram, ISWAP, Bandits, armed robbers and other unscrupulous elements including their collaborators and sympathisers in order to completely root them out and destroy their networks of local and international support.

The citizens and the media should know that the Nigerian Military is their Military and whatever affects it has direct consequences on national security. The Nigerian Armed Forces and other security agencies have continued their major operations across the country with renewed vigor, unnecessary distraction and campaign of calumny against the military in the media, especially social media will not be in the best interest of our nation. It is important to mention the existence of a blurry line between media freedom and National Security. Journalists as the representatives of the fourth estate of the realm are to guard against possible harms from unauthorized disclosures of information which are potentially harmful. It is the duty of a journalist to know which information(s) to be shared publicly and what truly should remain secret in the interest of National Security and Operations Security. There is a need for a clear understanding that peace and development can only take place when there is security of lives and properties and we can’t have freedom where the state is non-existent.

Information gate keepers and journalists at large should always inculcate the attitude of information and operations security in their daily routine for the sake of National Security. Margaret Thatcher’s once said that “Publicity is the oxygen of terrorism as terrorist organisations and enemies-within sought to spread their messages and instil fear in the public through the reach of mass media outlets.

Beyond the annual rituals of coming out to pour emotional tributes on social media to our national heroes that lost their lives on the battle line while defending our beloved Motherland, the Federal Government (FG) should be more committed to the welfare of the families of our fallen heroes, through economic empowerment programmes for their widows and educational scholarship for their children. In doing so, FG could set in motion for the establishment of Veteran Support Commission to institutionalise the above mentioned. While prompt payment of service personnel entitlements and improved welfare condition are also important. Citizens on their part should empathise with the sufferings of our Armed Forces by showing respect, love and kindness to them in both private and public space.

In conclusion, as we continue to remember our fallen and living heroes, Nigerians should come together and support our military to succeed in its constitutional responsibilities and all hands must be on deck by being vigilant and cooperate with our military and other security agencies by availing them credible and timely information to help their operations. Nigerians should be proud of our military, in line with what is obtained in other saner climes.