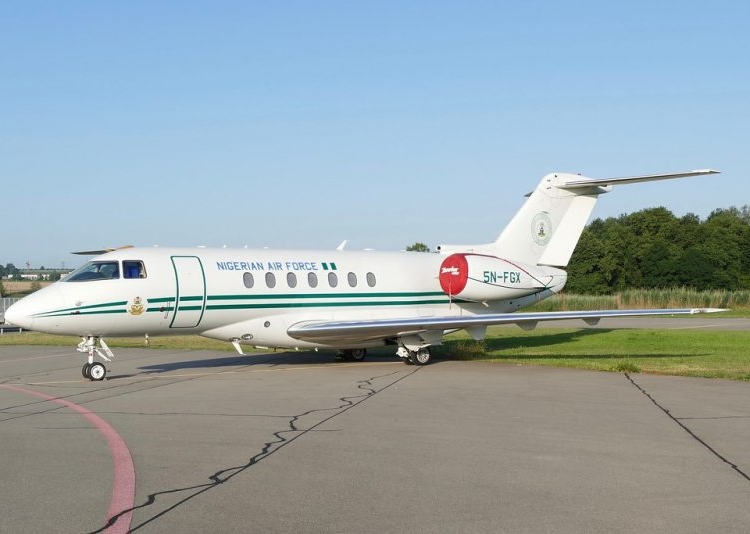 The Nigerian Government Presidential Air Fleet will now own one less VIP jet in no distant time, the President has offered it’s Air Force three Hawker 4000 aircraft with registration number, 5N-FGX/ : RC 066 up for sale.

The Air Force three Hawker 4000 jet was manufactured by Hawker Beechcraft, acquired in December 2011, and it was sold for $22.91 million at that time.

The Nigerian Presidential Air Fleet Hawker 4000 aircraft has the capacity to carry nine passengers and three crew, for a distance of 3,190 nautical mile, however, it has flown for a total of 1,768 hours.

Although, the Federal Government declined to state the reason for the impromptu sale, it might not be unrelated to the current economic situation in Nigeria.

Since the COVID-19 pandemia began early this year, and the fallen oil price in the global market, Nigeria alongside several other countries particularly in Africa are experiencing economic depression.

Although, prior to ascension of office in 2015, Nigerian President Muhammadu Buhari promised to trim down unnecessary assets including redundant Presidential aircraft to save expenses.

Buyer’s who would like to own the nine-years old Hawker 4000 aircraft are advised to inspect it at the Presidential Air Fleet’ s hangar located at the Nnamdi Azikiwe International Airport, Abuja, a government publication on Wednesday disclosed.

But first, Interested buyers will need to submit their closed bid to the Chairman, Committee for Sale of Aircraft , Office of the National Security Adviser , care of Special Services Office, Office of the Secretary to the Government of the Federation.

This is after they might have submitted a refundable bank draft for $50,000 to the committee with the bid. All the bids should be quoted in United States dollars, the publication stated.

The notice read, “Please note that all bids must be submitted within one week of this publication . Background check is required as a pre- qualification for the bid. Prospective bidders who want to inspect the aircraft will be granted access within one week from this advertisement. ”

This is not the first time the Presidency is selling of it’s operational aircraft, similarly in 2016 put up for sale two presidential aircraft, a Falcon 7 X executive jet and Hawker 4000.

Some aircraft in the fleet would still be handed over to the Nigeria Air Force for its operations. In 2016, the PAF handed over a newly acquired Augusta A-101 medium lift helicopter to the Air Force, it was lost in a crash soon afterwards.