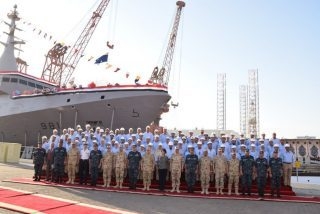 Al-Moez was launched on 12 May during a ceremony attended by the Commander of the Egyptian Navy Vice Admiral Ahmed Khaled, Chief of Staff of Egypt’s military General Mohamed Farid, chairman of Alexandria Shipyard and the Consul General of France in Alexandria, Janina Herrera.

Al-Moez is the third of a total of four ships to be built locally by Egypt. Four Gowind vessels was ordered from France’s Naval Group (formerly DCNS) for one billion euros in 2017, with three to be built in Egypt. The first vessel, ENS El Fateh, was built in France and delivered to Egypt in October 2017.

A panoramic bridge offers 360° visibility and a single enclosed mast offers 360° sensor visibility. The mast integrates the SETIS combat management system as well as most sensors of the Gowind corvette including SMART-S radar and electronic warfare equipment (including Sylena decoy launchers).

Egypt’s vessels are equipped with 16 VL-MICA surface-to-air missiles and eight Exocet MM40 surface-to-surface missiles as well as one 76 mm and two 20 mm guns. The vessels can each carry one medium helicopter and will be fitted with torpedo launchers. Sensors include a Kingklip sonar and Captas 2 towed sonar.

Naval Group has also established an Egyptian subsidiary called Alexandria Naval with the aim of providing in-service support for the delivered vessels.

Few weeks ago, TKMS delivered the third of four Type 209/1400mod submarines for the Egyptian Navy.