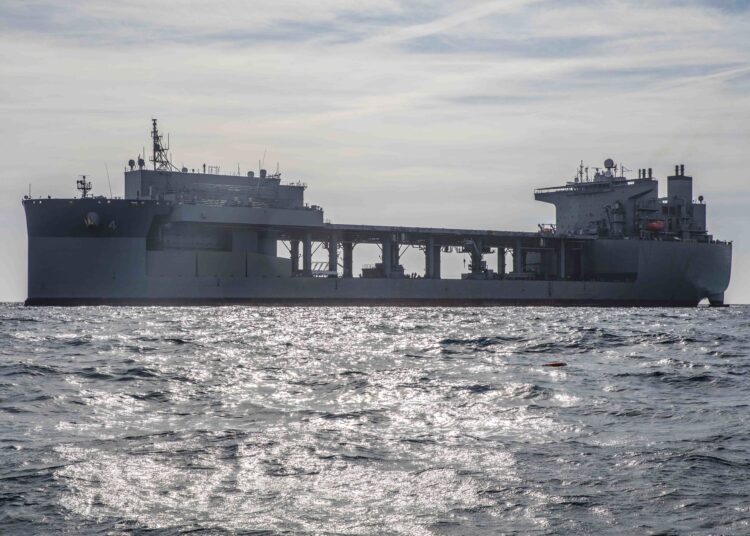 The Expeditionary Sea Base USS Hershel “Woody” Williams (ESB 4) has completed its maritime security patrol deployment in the Gulf of Guinea. “Woody” has arrived at Naval Station Rota, Spain, on April 18, 2022.

Obangame Express is one of three regional African exercises facilitated by US Naval Forces Europe-Africa. The exercise is part of a comprehensive strategy by US Sixth Fleet and US Africa Command (AFRICOM) to provide collaborative opportunities among African forces and international partners to address maritime security concerns, the US Navy said on 10 March.

“The men and women that made this possible are a testament to our shared values and commitment to ensuring the safety, security, and freedom of navigation on the waters surrounding the African continent,” said Capt. Michael Concannon, commanding officer, USS Hershel “Woody” Williams.

In April, as part of the African Maritime Law Enforcement Partnership (AMLEP), the joint team, led by Cabo Verde, worked in coordination with the Maritime Analysis and Operations Centre – Narcotics (MAOC-N), the International Police (INTERPOL), and Cabo Verde’s national Maritime Operations Center (COSMAR) to conduct a compliant boarding of a Brazilian-flagged fishing vessel, which led to the seizure of approximately 6,000 kilograms of suspected cocaine with an estimated street value of more than $350 million.

“I couldn’t be more proud of the professionalism and integration of the U.S. tri-maritime services, partner nations and other supporting organizations during our maritime security operations,” said Concannon. “These maritime security events show the world that our African partners are poised and ready to strike against illicit activity.”

Hershel “Woody” Williams is the first warship permanently assigned to the U.S. Africa Command area of responsibility. The U.S. shares a common interest with African partner nations in ensuring security, safety and freedom of navigation on the waters surrounding the continent, because these waters are critical for Africa’s prosperity and access to global markets.

The ESB ship class is a highly flexible platform that may be used across a broad range of military operations. Acting as a mobile sea base, they are part of the critical access infrastructure that supports the deployment of forces and supplies to support missions assigned.

For over 70 years, U.S. Sixth Fleet forces have forged strategic relationships with our allies and partners and solidified a foundation of shared values, experiences and vision aimed at preserving security and stability.

U.S. Sixth Fleet, headquartered in Naples, Italy, conducts the full spectrum of joint and naval operations, often in concert with allied and interagency partners, in order to advance U.S. national interests and security and stability in Europe and Africa.

Causes and Solutions to rising insecurity in Nigeria