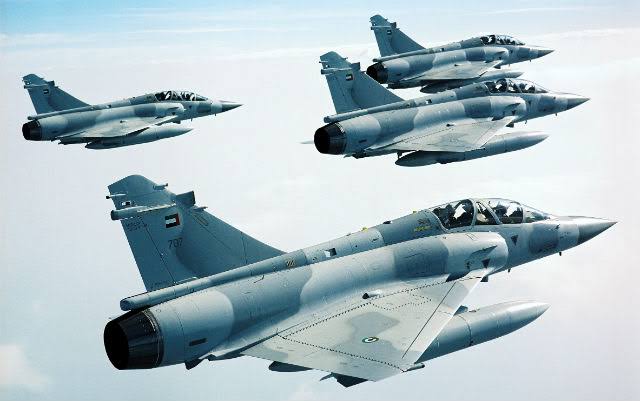 The baseline Mirage 2000 is considered the French equivalent to the American F-16 Fighting Falcon, although the lack of comparable upgrade packages including AESA radars or viable long range air to air missiles has left it effectively obsolete compared to its American rival.

The Kingdom of Morocco has been offered the entire Mirage 2000 fighter jets of the United Arab Emirates.

The United Arab Emirates (UAE) plans to replace its fleet of Dassault Mirage 2000-9s when it takes delivery of 80 new Dassault Rafale F4s it ordered from France last year.

When it does, Morocco will receive its sixty Mirage 2000-9s it acquired in the late 90s. Dassault Aviation recently announced that the UAE contract for 80 Rafales has now come into force, meaning it has received the down payment that activates the contract.

The United Arab Emirates intends to give the first batch of 34 Mirage-2000-9 to the Moroccan air forces, to support the 50 F-16s and the 30 modernized Mirage F1s currently in service, to counter Algeria’s vastly superior air fleet.

The arrival of the 34 Emirati Mirage 2000s would allow Rabat to equalize the balance of power with its Algerian neighbor, which operates around 50 MiG-29s, sixty Su-30s, as well as 13 MiG-25, and which may in future acquire modern fighter-bombers from Russia such as the Su-34s, or the Su-57 Felon stealth aircraft.

For the record, the UAE Mirage 2000-9 is a vastly upgraded version of the type, it was first acquired in the 1980s. Abu Dhabi currently has at least 56 of these Mirages. These Mirage 2000-9s able to conduct both offensive and defensive air-air and air-sea operations. The aircraft is capable of carrying air-to-surface missiles as well as cruise missiles such as the SCALP-EG.

In November 2019, Dassault was awarded a $489.5 million contract to upgrade this fleet further, with the French company Thales awarded a life-extension contract for these jets. The upgrade likely included Thales RDY-3 radar and the Talios advanced targeting pod used by the Rafale, although this isn’t confirmed.

Egypt, Greece, and Morocco have expressed interest for the Mirage 2000-9s. 34 will be go to the Kingdom of Morocco, while the rest to Egypt.

Egypt was the first foreign buyer of the Mirage 2000 which it ordered in 1981. Last May, Egypt reached an agreement with France for the purchase of 30 additional Rafale fighter jets worth 3.75 billion euro ($4.5 billion).

The new Rafale aircraft will complement the 24 Rafales acquired six years ago, thereby bringing the total number of Rafales in the Egyptian Air Force to 54.

On the other hand, Morocco has been working on rearmament since breaking diplomatic relations with Algeria. Tension in North Africa in the wake of the rift between the two countries has escalated significantly in the last three months.

The arms race between Rabat and Algiers reached a tipping point when in January, the two North African countries and rivals geared up to acquire advance 5th generation stealth fighter aircraft to significantly boost their air power capacity.

Morocco recently requested 25 F-16 Block 72 jets from the United States in March 2019, the most advanced variant of the jet ever built.

Although Morocco has never operated the French-made Mirage 2000 but has nevertheless trained its pilots on it’s simulators alongside Emirati pilots.

Preparations have already begun for the reception of the aircraft, with Moroccan maintenance teams being sent two weeks ago to the United Arab Emirates for training.

The Mirage 2000-9 fighters will reinforce the air fleet of the Royal Armed Forces of Morocco already equipped with F-16s which will soon be updated to the Viper version.

Qatar has also pledged to deliver the same aircraft to the Kingdom of Morocco, a single aircraft has arrived at the Meknes air base in recent weeks. The offer was eventually declined by the kingdom. On the grounds that the Emirati Mirages would be better maintained.

The Mirage 2000 could help Rabat replace each one of its F1s and F-5s with the 56 modernized Emirati Mirages, which could serve as an interim solution until the country eventually procures F-35s or other fifth-generation fighters.

The baseline Mirage 2000 is considered the French equivalent to the American F-16 Fighting Falcon, although the lack of comparable upgrade packages including AESA radars or viable long range air to air missiles has left it effectively obsolete compared to its American rival.

Although vastly modernized, however, even with the improvements on the aircraft, it is still outmatched by fighters deployed by their respective neighbours such as the Israeli F-16I and F-15I and the Algerian MiG-29M and Su-30MKA.