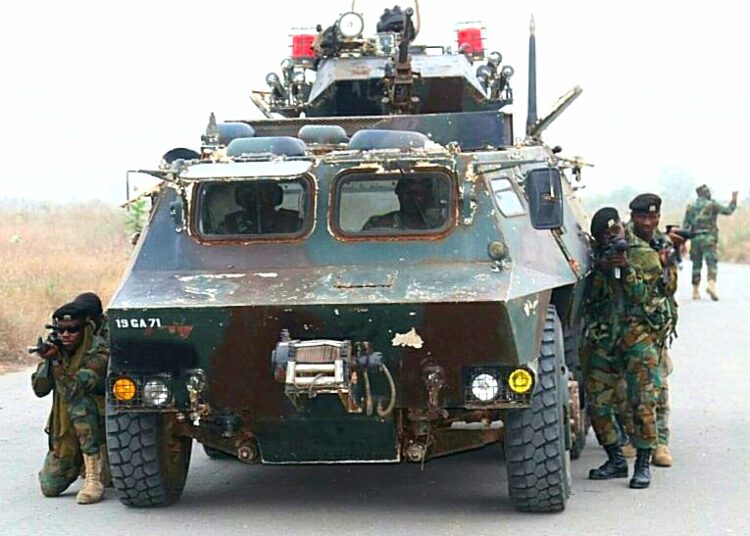 Ghana has taken the first step in building a viable military industrial complex to supply it’s military with equipment.

Vice President Mahamudu Bawumia Monday, 4 April, inaugurated a joint venture companies under the Defence Industries Holding Company (DIHOC), and also commissioned construction equipment worth US $18 million to support the military’s operations and the General Headquarters Office Complex of the Military.

US to supply two Defender class boats to Ghana

Each of the JVCs under DIHOC has its own board and management team to provide strategic policy direction and day-to-day administration of the companies.

The military industrial complex would provide 1,500 direct jobs and an avenue for the Military High Command to generate revenue internally for its operations and contribute towards the overall socio-economic development of the country.

The partnership is expected to generate 1,500 direct jobs for soldiers, retired officers and civilians and bring an investment portfolio of over a billion dollar into the Ghanaian economy.

Vice President Bawumia, while inaugurating the JVCs at the Burma Hall, in Accra, said the GAF and other security establishments in the country had depended mainly on the import of security hardware and equipment for their operations, noting that those armaments such as armoured vehicles, weapons, ammunition, communication systems, were procured from external entities mostly through Sales and Purchase Agreements with foreign suppliers.

However, the armaments acquired through sales and purchase agreements raised several challenges which undermined the efficiency of the Military.

“For example, most of the foreign suppliers did not have a local logistics support presence in Ghana to help maintain those sophisticated armaments,” Dr Bawumia noted.

Also, there was little skill transfer and no transfer-of-technology in such Sales and Purchase arrangements with foreign suppliers,” he observed.

He said most Ghanaians only knew the GAF for its prowess in national protection missions and international peace-keeping assignments, however, the security services were a great repository of resourceful human capital in various fields of endeavours such as Engineering, Architecture, Business Administration, Logistics Management, Nursing, Medicine, among others.

He said many countries such as the State of Israel, the Arab Republic of Egypt, and most developed and middle income developing countries in Europe, the Americas and Asia, had all leveraged their militaries to catapult their development through “defence industrial complexes”.

He said Ghana was yet to take full advantage of the huge technical human resource the Armed Forces possessed to propel the country’s development agenda.

He said the Armed Forces had the DIHOC for some years now but had not been leveraged significantly to catalyse the industrialisation of the country until now.

The DIHOC Footwear Division to produce footwear of all kinds, especially for security services, DIHOC- Primesec Ghana Limited for the construction of both vertical and horizontal infrastructure,

Others are: DIHOC – Kenaki Manufacturing Company Limited (DIKMAC) for the assembling of armoured vehicles, including armoured bullion vans as well as weapons, DIHOC-McDan Logistics Solutions Limited for the development of an ultramodern onshore logistics hub and an amusement park, DIHOC – Careworld Ghana Limited for the “The Greater Good Project,” which comprised the development of a 1,500-bed hospital capacity, health farms, Pharmaceutical Company, and a Veterans Village,

Dr Bawumia said under the industrial complex, 20,000 acres of land secured into a cattle ranch and other agro-businesses, a garment factory; iron rods manufacturing factory; an aquafarming project and a tourist site; a solar project; and the development of an integrated economic smart city.

These were all joint venture entities formed between private companies and the GAF; therefore, the development presented a beautiful synergy between the efficiencies availed by the private sector and the institutional discipline to drive the industrialisation strategy of the Government.

The Vice President encouraged business community to go into more collaborations with the Armed Forces to develop a diversity of production value chains that would benefit both military and civilians.