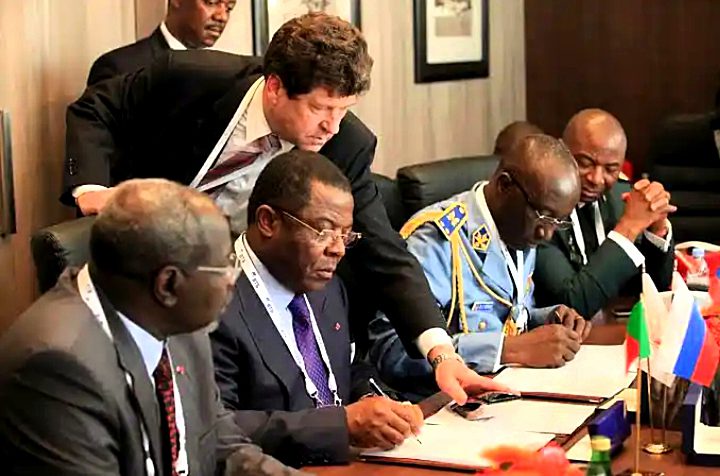 Amid Western sanctions and condemnation on Russia over the Russia-Ukraine war, Cameroun has signed a 5 yrs bilateral defense/security alliance with Moscow.

Cameroon entered the agreement on April 12 with Russia for military cooperation, training, research, information exchange and fight against terrorism in a 13-page document.

The defence agreement which many sees as an affront to French regional domination will likely be protested by former colonial master Paris – after it’s ongoing elections.

Cameroon has held bilateral relations with Russia since 2015, the agreement marks a continuation of military ties with the West African country. In April, Cameroon had abstained from all votes regarding Russia during the UN General Assembly vote in February calling for the Moscow’s withdrawal from Ukraine. Cameroon was also absent during the first voting session.

Last week, Joseph Beti Assomo, Cameroon’s defence minister, made a discreet visit to Moscow which culminated into the new military cooperation agreement between the two countries.

The symbolic trip comes at a time when the Kremlin has relaunched its offensive in Ukraine. Joseph Beti Assomo, the presidency’s minister delegate in charge of defence, had left Yaounde for Moscow, where he met with his Russian counterpart, Sergei Shoogou, one of Vladimir Putin’s inner circle.

In the 13 page document, the two countries agree to exchange opinions and information on defence policies and international security, development of relations in the areas of joint training, medicine, topography or military hydrography.

They also agree to exchange experiences, and interaction in peace support operations under the aegis of the United Nations.

The agreement document read in part;

“The Government of the Republic of Cameroon and the Government of the Russian Federation hereinafter referred to as the Parties: Recognising the strengthening of friendly relations between the States Parties on the principles of sovereignty, equality, respect for interests and non-intervention in internal affairs,”

The recent defence and security pact will likely see more weapons purchase. In 2013, Cameroon’s Ministry of Defence signed a contract with Russia for the delivery of Mil Mi-17 transport helicopters. This preluded the an April 2015, Russia-Cameroon military-technical cooperation agreement.