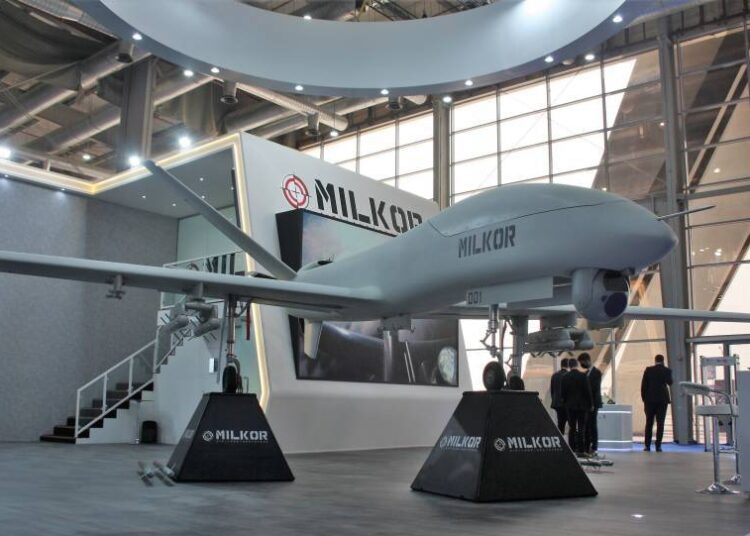 The drone was first officially launched officially at the 2021 International Defence Exhibition and Conference (IDEX), in Abu Dhabi.

According to Milkor, the UCAV is a multi-functional airborne platform that can be used for surveillance, reconnaissance, and opportunistic engagement operations. With a wide variety of payload options (1,300 kg maximum take-off weight), the Milkor UCAV acts as a guardian in the sky and can conduct extended range and long endurance missions.

Designed for operational versatility whilst autonomous flight, take-off, and landing are achieved through its onboard flight control system. Automations, pathway placements, and loiter pattern creation ensure the simplification and success of complex missions, say Milkor.

The Milkor UCAV is equipped with dual redundant Line of Sight communications (LOS) systems that can maintain contact with its control unit for up to 150 km.

A modular design approach was included in the ground control station (GCS), allowing customizability for each customer to ensure optimal operation and functionality of the Milkor UCAV.

The Milkor UCAV allows for adaptability according to customer requirements with a specially engineered airframe that ensures long-endurance (more than 35 hours) at medium altitudes (up to 30,000 ft maximum), allowing increased performance on all fronts and all-weather conditions.

The company CEO confirmed that Saudi Arabian authorities have shown “good amounts of interest,” and conducted “back and forth” discussions, but declined to name the agencies involved or share a progress report.

For combat operations, Milkor’s Desert Sting guided munition has a range of 16km and can engage armoured and light stationary or moving targets. The Desert Sting Is equipped with an inertial navigation system and GNSS for navigation with an optional semi-active laser seeker.

The Desert Sting guided munition was designed jointly by Milkor and UAE’s HALCON. Halcon has been contracted to supply 16 Desert Sting to the UAE military in a $1 billion contract awarded in November 2019.