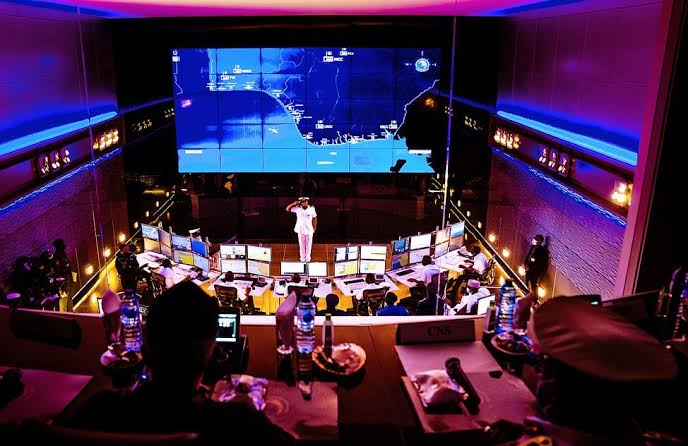 General Magashi said the “Nation’s Cyberspace is sacrosanct, sinquanom and Strategic to National defence and development which must be defended against internal and external infractions.”

The Defence Minister therefore tasked DSA to shore up Defence against modern threats by the Non- State actors which he said are technology driven and advancing geometrically in sophistication and complexity.

While congratulating the Chief of Defence Space Administration Rear Admiral Muogilim on his appointment, he charged the management of the DSA to be ahead of the adversaries by fortifying the National Cyberspace

He assured the DSA of the support of the Ministry of Defence under his watch and restated the need to strengthen inter – agencies collaboration and cooperation necessary to grow Cyberspace sector.

The Chief of Defence Space Administration Rear Admiral Nnamdi Anthony Muogilim thanked the Minister of Defence for his mentorship in providing strategic direction to emplace DSA that is capable of safeguarding National Cyberspace.

He outlined the new thinkings of the DSA management to grow National Cyberspace in partnership with Strategic Stakeholders in the sector with 60% Civilian Staff and 40% Military Personnel in his Area of Responsibility AoR.

The Chief of Defence Space Administration who was former Director of Communication and Information Technologies Naval Headquarters and former Deputy Director Space Operations at DSA before his new appointment explained Strategies to break new Operational grounds in Cyberspace Defence capabilities especially now that the country is preparing for the 2023 elections.

The Act establishing Defence Space Administration formally known as Defence Space Agency was enacted in 2016 by 8th National Assembly and signed into Law in 2017.

It has the mandate to promote National Security and development, support Military Operations and to improve the Nigerian Armed Forces Cyberspace capabilities.

The command would also monitor the Nigerian Army’s networks and advise Field Commanders on how to use the newly procured computer based weapons systems recently inducted to the Theatre of Operations.

The Nigerian Air Force (NAF) may in the near future set-up it’s own cyber warfare operations unit to combat cyber threats within its sphere of influence.

“Drawing from the NAF’s definition of air power, which includes the ability to project military power or influence through the control and exploitation of air, space and cyberspace to achieve strategic, operational and tactical objectives…”

In projecting into the future, Chief of Air Staff Air Marshal Oladayo Amao in a
paper titled, “Operational Insights, Current Capabilities and Future Priorities of the NAF” for the International Fighter Conference 2021 held in London, England, stated that he envisions a “NAF that is well equipped and postured to adequately contend with threats and challenges in a digital environment. He is also optimistic that the NAF of the future would seek additional capabilities that would allow it to engage adversaries in the digital and information environment…”