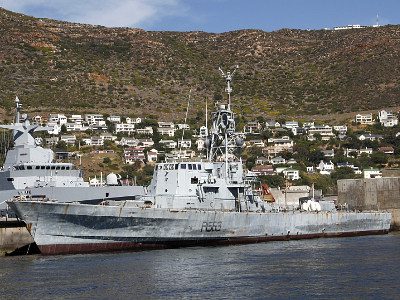 South African Navy (SAN) strike craft SAS Adam Kok (P1563) may soon be sold or destroyed as the vessel is deemed surplus to the navy’s needs.

The offshore patrol vessel is being towed to Simon’s Town to await her fate. State’s Armscor’s Defence Disposal Solutions (DDS) has been tasked to either sell SAS Adam Kok (P1563) or destroy the vessel.

SAS Adan Kok (P1563) is part of a nine-strong fleet of the Warrior-class formerly known as the Minister class, because they were named after South African Ministers of Defence.

On 1 April, 1997, following political changes in South Africa, the class were re-designated as the Warrior-Class strikecraft.

Adam Kok was originally earmarked for OPV refurbishment in 2014, which never materialized. The entire Warrior-class strikecraft is now being decommissioned in phases to make room for a new class of multi-mission patrol vessels being built in South Africa.

In the meantime, another Warrior-class SAS Makhanda a Warrior-class is now in Mozambican waters as part of the maritime contingent of the Southern African Development Community’s intervention brigade, known as the SADC Mission in Mozambique or SAMIM.

The strike craft is conducting patrols and ensure that the Mozambican waters will be free off pirates and insurgents.

For thirty years, the Warrior-class were the backbone of South Africa’s fast attack and patrol fleet.