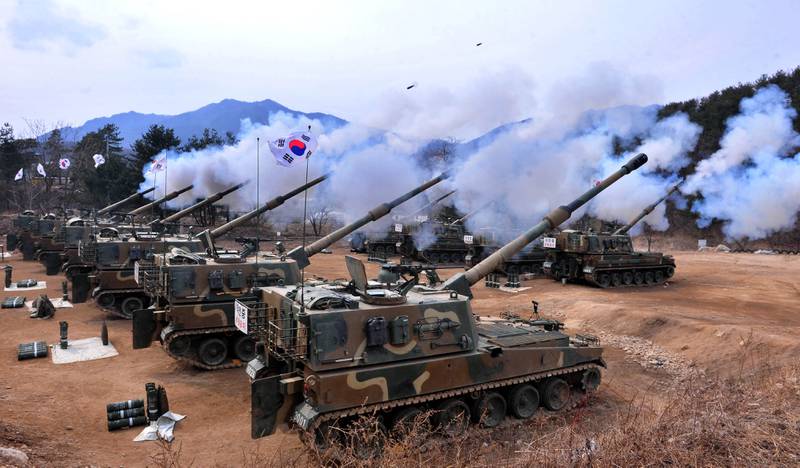 Egypt has inked a deal with South Korea for the joint manufacturing and acquisition of 155 mm K9 self-propelled howitzers, and other support vehicles from Hanwha Defense.

The Egyptian Armed Forces’ spokesperson confirmed the signing on 1 February.

According to South Korea’s official Yonhap news agency which cited the country’s Defense Acquisition Program Administration (DAPA) as saying that an Egyptian K9 agreement is worth more than KRW2 trillion (USD1.65 billion) had been finalized.

An initial batch of the artillery will be delivered by Hanwa Defense, with the rest of the artillery and vehicles to be locally produced at Factory 200, a state-run defense manufacturing facility just outside the Egyptian capital by South Korea’s Hanwha Defense and companies affiliated with Egypt’s Ministry of Military Production (MOMP) and referred to as the K9A1 EGY variant.

The agreement was signed in Cairo in the presence of key Egyptian defense officials as well as the Korean ambassador and the chief of South Korea’s Defense Acquisition Program Administration (DAPA).

DAPA chief Kang Eun-ho was quoted by Korean media as saying that; “It is an achievement made through a combination of technological cooperation, collaboration in terms of localized production and pan-government support, which goes beyond just the transactional relationship between the two nations.”

“This is the first time we are exporting to a country in Africa, following our exports to Asia, Europe and Oceania,” said DAPA in a statement Tuesday. “With this deal, Egypt has become the ninth country in the world, including Korea, to operate the K-9 self-propelled howitzers.”

Egypt’s decision to purchase the K9 howitzer is due to securing of a joint production deal, which comes more than a decade of bilateral negotiations which were delayed by the Arab Spring and Egypt’s insistence on decreasing the technology transfer fee.

The Egyptian sale is the largest export contract for the K9 Thunder. Significant progress was made in their negotiations in January, when President Moon Jae-in told local media on January 20, that South Korea and Egypt are on the final stage of discussions to co-producing the K2 Black Panther main battle tank in Egypt, and the acquisition of the K9 155mm self-propelled Howitzer from Hanwha Defense.

French Nexter’s Caesar, South Korean K9 Thunder, Russian Koalitsiya-SV, and Chinese PLZ-45 had competed for the contract in 2017, with the Caesar and the K9 coming top in the final competition.

Around 200 artillery systems will be supplied along with support vehicles including the K10 ammunition resupply vehicle.

Discussion by the two countries first began at the sidelines of the EDEX 2021 exhibition in Cairo, where Hanwha Defense showcased a special variant of the K9 155mm howitzer at dubbed the ‘K9EGY’ with a desert scheme.

In addition to the K9 Howitzer deal, Korea and Egypt on 1 February also signed a memorandum of understanding for defense research and development cooperation, and both countries will collaborate in the fields of railway development, desalination, and renewable energy, amongst others.

The deal comes soon after Korean president Moon Jae-in visited Egypt on 19 January as part of a tour through the Middle East. The visit saw Korea and Egypt conclude economic partnership agreements related to multiple areas such as renewable energy and railway development.