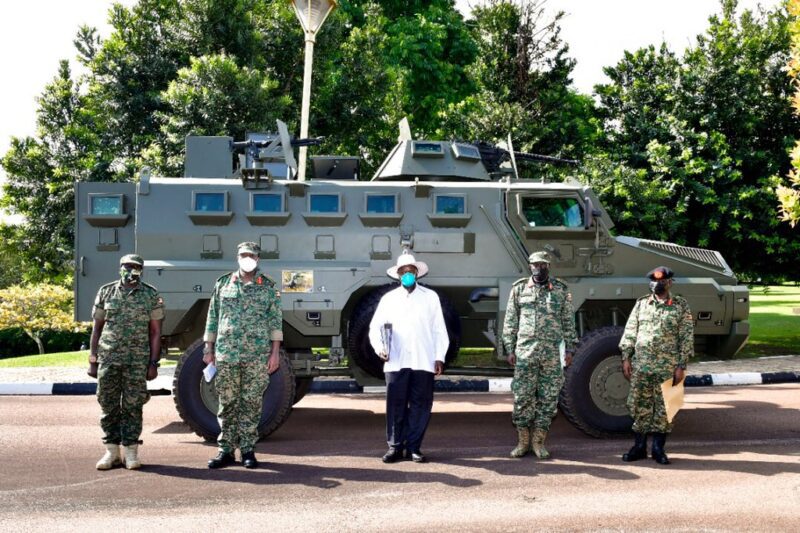 The name ‘Chui’ for the armored vehicle is derived from a Kiswahili word for Leopard.

The Chui armored was commissioned by President Yoweri Museveni, Commander-in-Chief of the UPDF, during a function at State House in Entebbe on 18 October. UPDF’s Lieutenant General Muhoozi Kainerugaba, commander of its land forces, announced a day after that it was made in Uganda by the Armoured Vehicle Manufacturing and Assembly Facility in Maga Maga, near Jinja, which has also manufactured the Nyoka armored personnel carrier and Nyoka weapons platform.

The Chui 4×4 armored vehicle will strengthen the UPDF’s mobility and also improve its capabilities. President Museveni posted on Twitter that “Uganda spends over $550m each year on importing vehicles from Japan and Europe.”

The Chui armored vehicle appears to be largely based on South African Twiga’s Nyati mine-resistant, ambush-protected vehicle (MRAP) that was unveiled earlier this year, and it incorporates elements unique to the Land Forces of the UPDF.

The infantry fighting vehicle variant of the Nyati is armed with a 20 mm gun mounted on a light turret. The Ugandan variant displayed during the commissioning had a protected weapon station with a 12.7 mm DShK heavy machine gun and two QZL-87 grenade launchers on pintle mounts that can be operated from the passenger compartment.

The Nyati armoured vehicle is mine- and ballistically protected, with standard NATO STANAG Level 2 ballistic protection up to 7.62×39 mm armor-piercing rounds; Level 4B blast protection protects up to 10 kg mines under the center of the vehicle, according to Damian de Lange, CEO of Twiga.

Twiga and Impala Services and Logistics had earlier established a manufacturing and maintenance facility for the Nyoka armored vehicle at the UPDF’s Magamaga Barracks. The Nyoka is a version of the South African-developed Mamba.

The Nyati is already being produced under a technology transfer agreement for an unnamed African launch customer.

In addition, Ugandan technicians manufacturing the vehicle have been trained in armor welding, pneumatics, auto-electrical and mechanical skills.