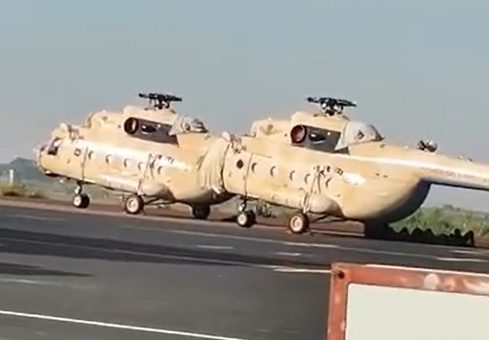 Mali has taken delivery of at least for Mil Mi-17 helicopters from Russia to bolster its fight against insurgents linked to Islamic State and al Qaeda.

The four Mi-17 helicopters were delivered aboard an Antonov An-124 cargo aircraft along with several caches of weapons and ammunition, at the capital Bamako.

Malian interim defense minister Sadio Camara who supervised the offloading of the helicopters said that “Mali bought these helicopters from the Russia Federation, a friendly country with which Mali has always maintained a very fruitful partnership.”

According to the minister, Mali received the helicopters per the contract signed in December 2020 with the outlook to support the Malian armed forces in their fight against the insurgents.

This new delivery follows another four Mi-35 attack helicopters previously delivered; two were delivered in September 2017, a third was delivered in 2018, and the fourth on 13 January.

The four brings the total number of the Mi-35s in Mali to eleven. Mali previously acquired at least seven Mi-24D helicopters second-hand from Bulgaria between 2007 to 2012.

Two H215 Super Puma were acquired for $18 million from Airbus Helicopters within that period.

The new helicopters will be used to combat extremism in the country, at this time where Mali is turning to Russia’s private military Wagner Group, and as France, the major security ally remodels its security architecture.

France is revisiting its military footprint in Africa’s Sahel, in view of reducing its troops’ number as joint European task Force deploys.