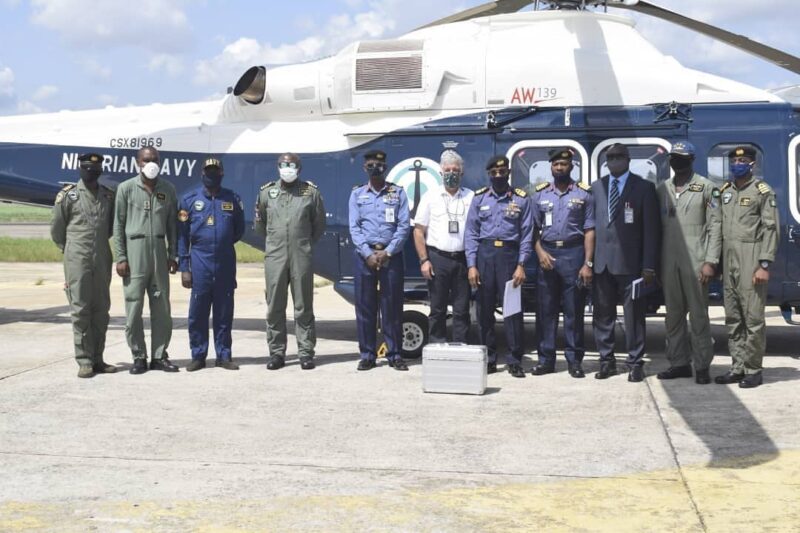 The Nigerian Navy has taken delivery of its first AW-139 helicopter from Leonardo Helicopters, the helicopter was delivered Yesterday, 22 May.

This recent delivery is part of a $22 million contract signed between the Ministry of Defence and Leonardo Helicopters (formerly AgustaWestland) for four helicopters in 2006.

The four AW-139 helicopter will be operated by the Nigerian State House, the Government of River States and the Nigerian Navy.

The AW-139 helicopter has rather enjoyed some limited success in Nigeria, in September 2018, the Nigerian Maritime Administration and Safety Agency, NIMASA transferred its sole AW-139 search and rescue helicopter to the Nigerian Navy.

On 2 February 2019, an AW139 operated by Caverton Helicopters carrying Nigeria’s Vice president Yemi Osinbajo crash-landed in Kabba, Kogi State. Though there were no casualties, Caverton attributed the crash to bad weather.

The AW139 is capable of carrying up to 15 passengers or six litters with four medical attendants at 306 km/h 165 kt maximum speed. It features the Honeywell Primus Epic fully integrated avionics system that incorporates a 4-axis digital AFCS and large flat panel color displays in the cockpit.

The Nigerian Navy is also expecting several other utility helicopters, for instance, it is in talks with the European helicopter manufacturer Airbus to purchase at least three units of the Airbus AS565MBe Panther light utility helicopter for use on its naval vessels.

It is likely that the Nigerian Navy intends to use the Panther on it’s two Hamilton-class Offshore Patrol Vessels (OPV) which was donated to the by the United States Coast in 2013. It would primarily assist in the fight against piracy and oil smuggling plaguing the country’s coastline.