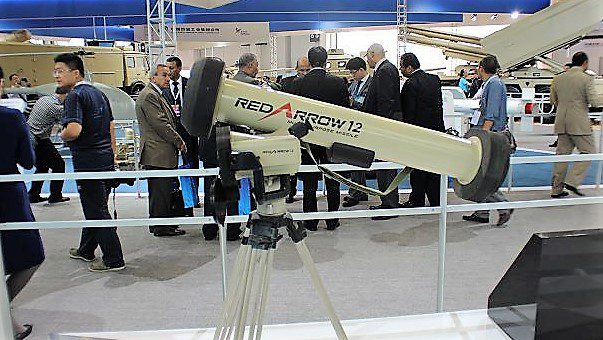 Norinco first made the announcement via its Wechat on March 29, 2020, although, the company declined stating the customer, the number exported, nor provided other details about the worth of the contract at that time.

The WeChat announcement explained that “as the client was in urgent need of the missiles,” the successful delivery had significant meaning for establishing Norinco’s market position and further opening up the market.

The HJ-12E was likely exported to Nigeria alongside several other modern equipment including VT-4 Main Battle Tank, ST1 Light Tank, SH5 artillery and other items, in a combined contract worth $152 million signed in 2019.

If confirmed, the Red Arrow ATGM will be used in Nigeria’s northeastern region where a counter-terror operation is currently ongoing against Boko Haram and the Islamic State. The two major terror groups are known to utilize heavily armed pickup trucks in quick maneuvers against Nigerian troops.

The Red Arrow 12E (HJ-12E) is the export variant of the HJ-12, which is seemingly in service with China’s People’s Liberation Army Ground Force.

A full-scale mock-up of the system was first shown at the 2014 Airshow China, the HJ-12 weighs up to 22 kg and uses a 1.25 m-long launch tube, is the China’s first man-portable ATGW system. The Red Arrow HJ-1 is often compared with the combat proven United States Raytheon/Lockheed Martin FGM-148 Javelin system,

The ATGW system also features a fire-and-forget capability, enabling operators to withdraw swiftly after a missile launch and improve their survivability. The system also has a soft-launch capability that allows for the missile to be launched within confined spaces such as within a building or a bunker.

It can hit targets including tanks, bunkers, small ships and helicopters from above, where armor is likely the thinnest, The missile of the HJ-12 system has a diameter of 140 mm and is fitted with a tandem, high-explosive, anti-tank (HEAT) warhead that is claimed to be able to penetrate up to 1,100 mm with a penetration capability of 1,100 millimeters of rolled homogenous armour (RHA) protected by explosive reactive armour (ERA).