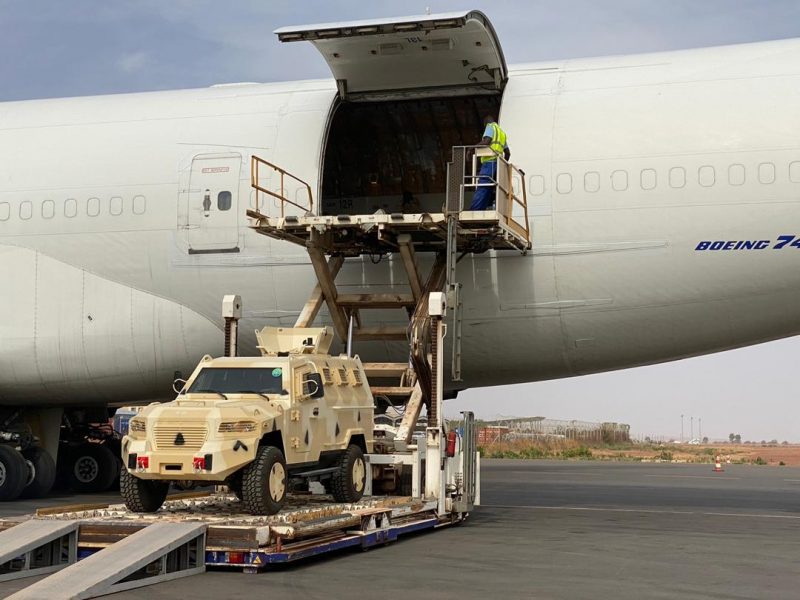 The United Arab Emirates (UAE) has delivered the first batch of 15 Streit Cougar armored vehicles to the Malian Armed Forces (FAMa) on 28 January, to support its ongoing counter-terrorism operations in the Sahel region.

This new delivery is part of an agreement that also includes the supply of 100 Streit Typhoon Mine-Resistant Ambush-Protected (MRAP) vehicles, with thirty-five Typhoons already delivered.

The Cougar 4×4 armoured vehicle is based on a Toyota Land Cruiser 79-series chassis capable of operating in various terrains depending on military specifications, it can carry up to 9 soldiers including driver and commander.

The Cougar 4×4 vehicle can offer protection against small arms of 7.62mm NATO caliber and artillery shell splinters. It can be equipped with various types of weapon stations and turrets armed with 7.62 mm or 12.7 mm machine guns or a 40 mm automatic grenade launcher.

The seven Typhoon MRAPs were ferried by an Antonov-225 Mriya strategic airlift cargo aircraft, which landed at the Modibo Keita international airport.