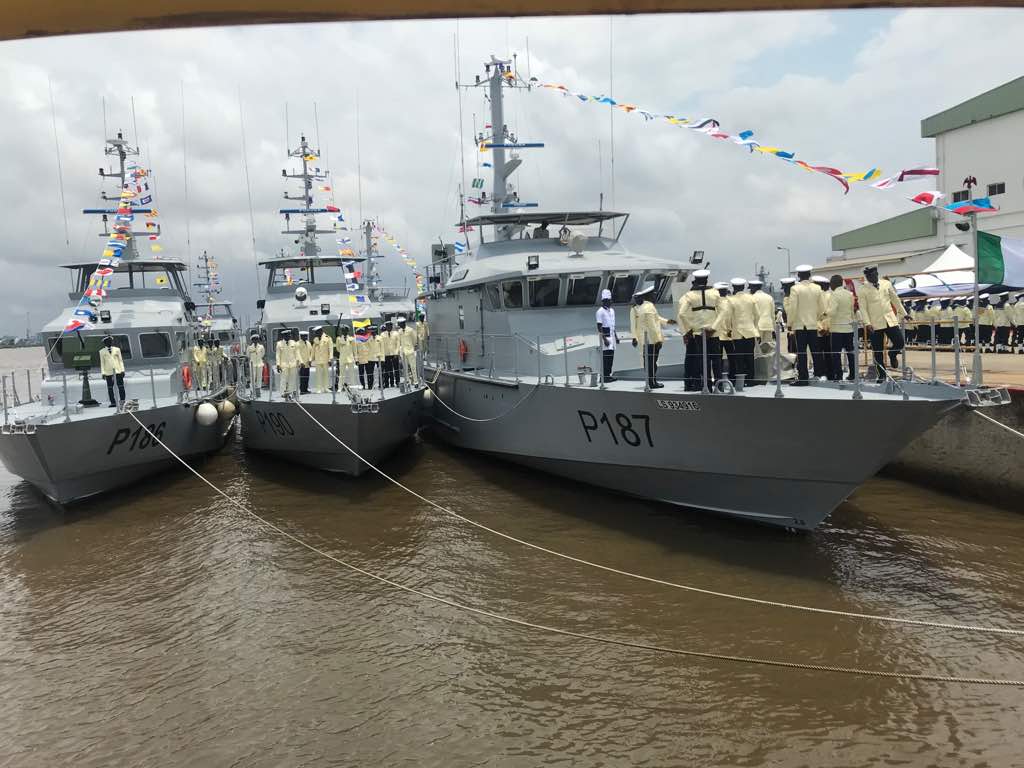 The boats were commissioned on 3 September by Minister of Defence, Brigadier General Mansur Dan-Ali, at the Naval Dockyard in Lagos. It has also revealed that more vessels are on the way.

These 35 metre vessels were ordered in February 2017 and are to be equipped with two 12.7 mm and one 20 mm cannon each. Nigeria has also ordered five FPB 72s from Ocea, with the NNS Gongola and NNS Calabar delivered in January this year, after the NNS Shiroro and NNS Ose arrived in 2017. These four vessels were also commissioned on 3 September.

It is not clear what type of small boats were commissioned but they could be 9.5 metre Guardian fast patrol boats built by Nautic Africa. In November 2017 the Nigerian Navy accepted four of the type out of an order for 14 – the other ten, which are 8.5 metre long variants, were to be delivered progressively.

The Nigerian Navy has also taken delivery of a number of 8.2 metre long boats built by Nigerian company Epenal, with around 60 been delivered over the last year.

Chief of Naval Staff, Vice Admiral Ibok-Ette Ibas, said the latest additions increased the Nigerian Navy’s acquisitions in the last two years to over 200. “Local boat building associates like Messrs Epenal Boat Builders and John Holt Plc which have accounted for the delivery of over 200 boats in the past have continued to be patronised. The navy dockyard remains productively engaged as it is on course for the delivery of a third straight Seaward Defence Boat (SDB), now a 42 meter boat.

“Furthermore, efforts are ongoing towards acquiring more fast patrol vessels for littoral waters up to the EEZ, while the construction of a hydrographic vessel and landing ship would further reinforce the navy’s regional maritime dominance,” he said.

Ibas noted that the construction of 20 rigid-hulled inflatable boats (RHIBs) by Suncraft “has reached an advanced stage, with the recent second milestone inspection reporting their possible delivery on schedule and within the next few months.”

“The acquisition of the six new Ocea FPC and 10 rigid hull inflatable boats will narrow the capability gaps in enhancing security of the country’s maritime expanse,” Ibas said. “Their commissioning and induction respectively into the service is therefore another operational milestone for the navy as they will complement existing Maritime Domain Awareness Capability in the face of its inherent need for a potent interdiction capability.

“I must however be quick to observe that despite this commendable stride, we have barely scratched the outstanding deficit in the navy fleet,” the Chief of Naval Staff added.

In his address, Dan-Ali said that “the reality of today exposes our dear nation to be challenged by multi-faceted threats from both continental and maritime fronts, with attendant grave manifestations and Increasing threats to maritime security. These pose a huge challenge that negates the vast potentials of the nation’s maritime domain and the Gulf of Guinea region in supporting the prosperity and wellbeing of states and their people. The peaceful use and maintenance of rule of law and order in this expanse have been afflicted by cross-border threats which constrain investment and economic development. Criminalities like piracy, sea robbery and attack on strategic oil installations have complicated the nation’s maritime security environment and threaten with dire consequences, the overall wellbeing of the nation.

“For a littoral state with huge dependence on her offshore resources, maritime security is vital to the nation’s well-being. Against this background of threats the entire nation would invariably be at risky situation if we do not insist on a motivated and virile navy like ours.

“I note with satisfaction that, in synergy with the other Armed Forces, the Navy has continued to maintain effective deterrence and appropriate operational posture. The induction of the platforms today is in line with the current administration’s promise to keep our nation safe. This commissioning ceremony is yet another demonstration of this administration resolve of protecting the nation’s maritime domain through the provision of appropriate military platforms and operating equipment also to the credit of His Excellency President Muhammadu Buhari’s administration.

“The procurement of these vessels by the Ministry of Defence again demonstrates this administration’s unwavering commitment and willingness towards strengthening the Navy through provision of modern operating equipment and infrastructure,” Dan-Ali said.