When the Sahel is threatened, Europe and France are threatened”, François Hollande

In 2014, French President François Hollande announced that French troops would be committed to combating violent Islamist militants in Africa indefinitely; to secure the Sahel region and to prevent trans-border passage of jihadist group.
The intervention effort code-named ‘Operation Barkhane‘ after a crescent-shaped dune in the Sahara desert. Operation Barkhane would succeed Operation Serval and Operation Epervier – French military mission in Mali and Chad respectively assuming total control of both missions’ resources while operating across all G5 Sahel borders.

Following the overthrow of former Libyan ruler Mohammad Ghadafi by NATO forces and local fighters in 2011, various arms and weapons looted from the military’s stockpiles has found their way through the porous Sahara desert down south fueling internal crises and regional conflicts. 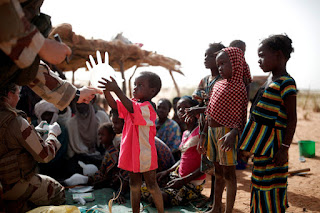 Consequently, in recent years, small arms sales in the black market have flourished abundantly in the Sahel region spurring the growth of radical Islamic networks, like Al Qaeda in Islamic Maghreb (AQIM), Boko Haram, Al Shaabab and Al Qaeda, among others. 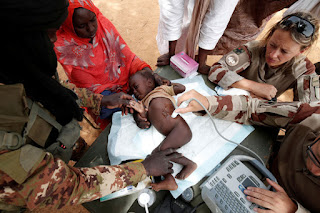 Islamist extremism has been on a salient increase since the turn of the century, the Sahel region is one of the harshest environment for human survival and sustainment coupled with the usual lackadaisical attitude of African leaders to tackle the massive poverty and economic hardship witnessed in the area.
Niger Republic

The Republic of Niger and Chad both located on the edge of the Sahara are one of the poorest countries on Earth. In Niger alone, 45% of the citizens live below the international poverty line. The country has a literacy rate of just 19.1%.

Furthermore, worsening climatic conditions have increased droughts that have affected agriculture yields in the country which depends largely on its agricultural exports. In Niger, agriculture makeup for 37% of its annual GDP. The last major drought which affected the country in 2010 is still being felt. 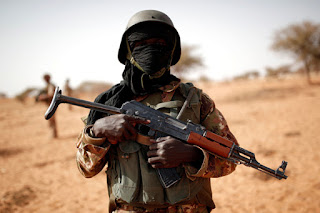 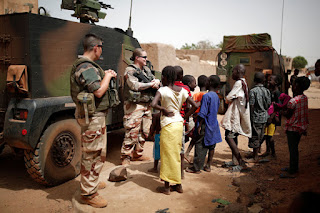 Since gaining independence from France in 1960, Chad has continually struggled to get on its feet despite being an oil-producing nation. Corruption, Mismanagement of national funds, post-colonial interference and harsh climate has dealt severely with the country. Chad has remained one of the poorest country on Earth till date.

More than half of Chad’s population live in abject poverty. The harsh reality and daily life is a reminder that poor planning, weak implementation and mismanagement destroys a country faster than anything else.

This disturbing declining economic posture, low literacy level and frustration at the government’s inability to show any semblance of proficiency has led to this region being a fertile ground for recruiting disenfranchised populace into terror organisations. 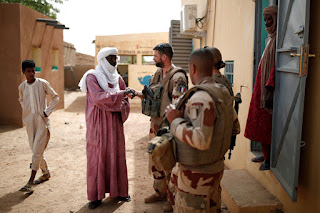 Known by defense pundits as ‘AN ARC OF INSTABILITY’ this is a large expanse of landmass plagued by violent extremism in the Sahel, terror groups such as Boko Haram, Al Qaeda continually challenge the peace and stability of the region.

Failed government, corruption, foreign interference and spillover from the crises in Libya has spurred a complex web of transnational terror network. In 2012, al Qaeda linked group took control of towns and territories in Northern Mali bringing the Sahel into international limelight.

Ironically, this area was once a bloody battlefield when Libyan forces Invaded Chad in what would be known as the “Toyota War.” France once again came to the aid of its long time ally Chad. The French Air Force even took a step forward by providing aerial protection to Chadian ground forces.

After years of intense battle to dislodge the terrorists they began moving southwards, prompting the French military to swing into action. The French-led Operation Serval pushed the extremist back. 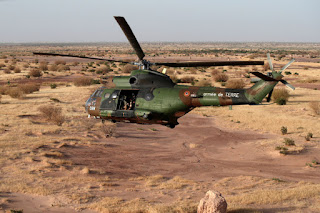 The British Prime Minister Theresa May met with the French President to Emmanuel Macron to discuss possible military cooperation. British officials are considering sending Chinook helicopters to support the French.
“We are looking at rotary support or ISTAR [Intelligence, surveillance, target acquisition, reconnaissance],” a Whitehall source said to the Times. “The effort is counter-terrorism, to counter organized crime and to help re-establish state authority.”
“The French definitely could benefit from logistical, intelligence, and other support given the constraints on French assets, and have at different times tried to adapt to the changing circumstances in the region,” Lebovich told Middle East Eye.
“The partnership is primarily meant to prevent obscure countries from becoming sanctuaries and breeding grounds for militants which could serve as a launch pad for an attack on a Western homeland,” Oyawale told MEE.

Even though at a presidential speech in Niamey, Niger on July 19, 2014, French President François Hollande tactically denies that Barkhane true purpose is assuring France national security and invariably the security of Europe. He did hinted that Barkhane would establish France as a global leader in combating Islamist extremism. Elements of Operation Barkhane has repeatedly supported local forces in preventing foreign interference. 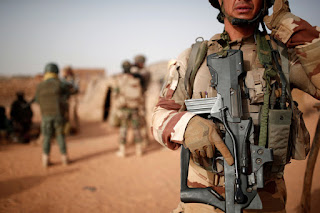 According to the Ministry of Defense of France, Barkhane’s objectives are:
Challenges faced in Operation Barkhane

Although, the resolve, determination and commitment of the men of France’s Operation Barkhane is unquestioned however, there are various situations which can cause serious problems and hamper the intervention which are.

1. Regional cooperation
The dissimilarity in language and culture amongst African countries in the Sahel is quite significant although more and more regional actors have recognized the threat posed by Islamist militancy in the region. Notwithstanding, national interest, ethnicity and religion would always be placed ahead of regional interest. It would be a herculean task for France to interweave this intricate socio-political and ethnoreligious multifaceted domain into one entity pursuing a singular goal.
2. France economic and financial posture
It is no news that France is not economically buoyant at the moment. In Europe, France has always been known as the ‘sick man of Europe’. The French economy isn’t growing at a very impressive pace, France is the weakest of Europe’s big 3 economies. The IMF predicts growth of just 1.4% for France in 2017, one of the weakest rates in the EU. France is also struggling to bring down its unemployment rate, which stands at roughly 10%.
The unemployment problem is even worse for young people: 24% of those between the ages of 15 and 24 don’t have a job. Government debt, meanwhile, has ballooned to almost 90% of GDP, up from just 58% a decade ago.
French military budgets is currently on its all-time lowest, with limited financial supports from its major allies the United States and Britain so with all its economic woes, how would France handle Operation Barkhane? With no end in sight, is Operation Barkhane slowly becoming an ambitious and expensive military venture which French economy might not recover from in a long while.
3. The Sahels’ landmass
The Sahara desert is own of the world’s most inhospitable and harsh environment and it has dealt severely with overzealous militaries from time immemorial. The terrain is so vast and porous that it would be almost humanly impossible to tackle smuggling and other vices across borders without significant commitment of military resources.

It is quite inevitable to mention France and Africa without the word Francafrique being recalled concisely.

French relations with Africa revolves round the ‘Françafrique’ concept. In 1958, former French President Charles de Gaulle promised to give independence to French African colonies if he was re-elected, this was primarily due to international pressure and anti-colonization movement in Africa at the time. Not necessarily due to his genuine love for Africa or the continents welfare.

To demonstrate to the world of his ‘goodwill’ President de Gaulle granted independence to many African nations except Algeria whose status was separate. He then clandestinely put his close friend and ally Mr. Jacque Foccart to device a medium to control French colonies even though they were independent.

Françafrique is a French Neo-colonialist relationship with former French-African countries. It was first used by President Félix Houphouët-Boigny of Côte d’Ivoire, to insinuate that his country’s ‘economic growth and political stability’ was a direct result of alliance with France. Since 2012, numerous socio-political pundits have spoken of a “return of Françafrique”. On 14 July 2013, troops from 13 African countries marched with the French military during the Bastille Day parade in Paris for the first time since French colonial troops were dissolved.

Although, many historians and political analyst dispute if the concept really existed. However, many former African nations encourages cooperation or pact with its former colonial masters. Such as the former President of Côte d’Ivoire Mr. Félix Houphouët-Boigny. Historically, France has always interfered in the affairs of its former colony states such as in 1977, when France and other countries tried to administer a coup in Benin Republic.

While the French efforts and commitment in Africa is commended,there is still  much work to be done. Military intervention is usually the first stage in stabilizing a disturbed region however, for true peace and prosperity to be achieved, practical and pragmatic approach that focuses on economic development, political enlightenment, youth education and poverty eradication have to be implemented.

In taking a more comprehensive approach to addressing the security challenges in the Sahel region, a solid socio-political framework devoid of selfish-interest and “exploit-ism” but rather encouraging participation and dialogue of all regional actors to develop a shared value centered on the regions’ interest.

Finally, collaboration between international partners and local authority is vital to sustaining a peaceful solution. Collaboration could include non-military assistance to improve delivery of good governance, engage communities and invest in infrastructural development to dampen the allures of violent extremism.

With no end in sight, would Operation Barkhane heralds France permanent military presence in Africa? Only time will tell…

All pictures were gotten from Reuter