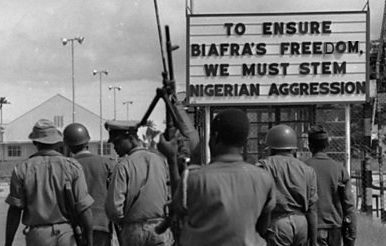 This Article is divided into three parts for ease of reading…

During August, 2017 I was contacted by someone from the intelligence community who was drafting a a study: ANALYSIS: POTENTIAL USES OF LIGHT CIVILIAN AIRCRAFT IN MINI-COUNTER INSURGENCY (MINI-COIN) ROLES

He had found my Biafran action among some dusty files and asked for details of what had actually happened. This guy had tried to convince decision-makers expensive, sophisticated weapons weren’t required to counteract small threats. Everyone should be remember people in Viet Nam complaining about using multi-million dollar F-4s to destroy bicycles.

His first e-mail contact to me said, in part:
“ .….. the idea that we would release half-million-dollar weapons—or more—against hostiles in battered pickups that they traded for a goat is astounding. Certainly such things can be done, but it is tantamount to using a shotgun to kill a fly.”

I pointed out to the planners at USNORTHCOM the example of your Biafran squadron, and they were rather amazed that simple light sport aircraft—with no advanced electronics, no GPS-guided munitions, nothing whatsoever that resembles the high-tech approach of an F-22 or F-35—were able to take on a decently-funded Russian-supported air force with MiG fighters and Ilyushin bombers, and show the world that all of that advanced approach ultimately meant nothing. Using the Malmo MFI-9 aircraft, your squadron destroyed half of the Nigerian bomber force, and a disconcertingly high number of MiG fighters.”

I have never publicly revealed details about my involvement, since I “never existed.” Over the years, I operated in this theater, and others, as an anonymous figure, code named Shadow.

The actual story is somewhat more complicated than reported. Major power centers – governmental and commercial – were in play behind the scenes as Biafra became a break-away state, looking for recognition.

Perhaps these shadowy forces were instrumental in the final decision of Ojukwu to act. There were huge dollar amounts in petroleum involved. Countless people’s lives were at risk.

Tens of thousands would die from starvation, unremarked and forgotten. Many of these were small children.

But the focus, at the time, seems to have been on economic resources, and who would control them.
What transpired between 6 July 1967-15 January 1970?
I was in California working on a follow-up to The Blue Max, and Darling Lili, two feature films I had been involved with in Ireland, where I had my War One aviation facility.
One morning a representative of the Santa Monica based RAND corporation arrived on my doorstep, accompanied by a Father Lynch from CONCERN, the Catholic relief organization. The RAND group had a scenario that needed a solution:

“There was the port. It was blockaded by a War Two corvette crewed by local sailors with ex-RN officers. The corvette was protected by a torpedo net. The boat was preventing tankers from loading at a refinery.”

What would I do to solve this problem?
During our first meeting, I was led to believe it was a film project.  Father Lynch was a strange element, but the follow-up discussions made things clear. The break-away state of Biafra needed help. The corvette was blocking Port Harcourt and Biafra’s  new government was counting on revenue from Shell Oil to survive. Father Lynch’s brother was flying a DC-6 for CONCERN- the Catholic relief agency. He operated out of Shannon, Ireland to San Tome, off the African coast, ten into Port Harcourt.

The USAF was eager to assist and offered 4 Boeing C-97 transports for a project that would be coordinated by Russ O’Quinn. Russ was an ex-USAF pilot who went on to test-fly for Douglas before creating his own civilian test unit – FLIGHT TEST RESEARCH in San Diego, Califonia. I sold Russ 2 Canadair F-86 for his unit.

They wanted an on-site analysis of the facilities and problems involved with Biafra. I would look around for them during my trip.

I ended up on an old Super Constellation, operated by Hank Warton, flying  into Africa from Portugal.  It was an interesting flight with an engine failure at about hour 9 en route. I was told this was not an unusual event since all the aircraft’s engines were well past their overhaul limits.

The tide was already beginning to turn against the   break-away state  and my corvette plan soon became redundant as Port Harcourt passed into the federal government’s hands.

At an earlier time, James Baring, one of my business associates, had introduced me to the man who would play a pivotal role in the Biafran War. James was a member of the Baring Bank family.  Ojukwu’s father was a close friend of  Lord Revelstoke, Baring’s father.   Ojukwu had attended Sandhurst. We  met during that period, and a later time when he returned to the UK for additional schooling.
Now we regained contact in Africa.

As the conflict progressed, MIG-17s and IL-28s, with Czech and East German pilots became a dangerous factor during daylight  and nocturnal periods. Subsequent conversations with Colonel Ojukwu and Count Gustaf von Rosen saw us discussing the MIG threat and what could be done. One of my Canadian associates, Roy Farran, had pioneered armed jeep units for the Special Air Service, during World War Two. Roy would tell the story in his book, “Winged Dagger.” I suggested this concept. (Rolf Steiner would carry out jeep attacks a year later.)

I then mentioned our idea of small attack aircraft, using the Bolkow-B208 as an example. We had one of these in Ireland and dozens flew around Europe. Their mid-wing configuration gave them great ground clearance and cockpit visibility. They were strong enough for underwing stores.
Von Rosen came to life!
He described an attempt to sell this very design to the Swedish military as the Malmo MFI-9.  5 of prototypes  now sat unwanted.
The rest is history. Colonel Ojukwu came up with the funds. Von Rosen’s friends acquired the 5 Malmo MFI-9s. The 5 aircraft were broken down and transported into the area in pieces. Then, like model aircraft, we reassembled them. A rough military finish was applied with paint acquired from the local Volkswagen dealership.
We had no spray gun, so we used brushes.
As our work progressed, a French team   from SNEB installed a rocket pod under each wing, giving us a salvo of 12 68mm Matra rockets, fired by a button on the top of the control column. I always thought the button resembled a doorbell button and perhaps this was the case, since we made do with whatever was available.
The aircraft originally flown by the Biafran team were a collection of orphans with ongoing spare parts problems. A couple of  ex-RCAF Harvards, B-25s, an A-26 and C-47s. Most of the pilots were lacking useful flying experience in a military environment. It is one thing to take off, and fly around, but it is an entirely different situation to fly in an air-to-ground attack mode with effect. One pilot had flown Spitfires with the RAF during World War Two.
Von Rosen was one year from retirement as a transport pilot and admitted his lack of experience for what was planned. Von Rosen and Colonel Ojukwu suggested  my RCAF experience would help guarantee success.  I agreed to fly with their unit.
Each of the first 5 missions were basically the same. They were planned and set out in advance. Local intelligence let us know what the situation was at he target areas. We just had to navigate, at low-level, from A to B… hit the target, then return home
Continue in Part 3…
Advertisements
Tags: Nigeria