Few people outside Africa knows that some African countries makes most of their own military equipment such is the case with South Africa one of the continents technological giants. South Africa’s Military Industries is quite advanced matching the technological development of even first world nations.

Necessity is the mother of all innovation…

Rooivalk, named after the majestic Red Kestrel falcon Bird in the local Afrikaan language was built to counter large formations of tank assault; blunting the edge of the onslaught sufficiently enough for other allied units to defeat the tank formation.

This impressive war machine was built when Apartheid South Africa found herself isolated from the world while also neck-deep in a brutal border war.

Designing, building and fielding such advanced aeronautical marvel is a feat all Africans are immensely proud of. The Rooivalk provides South African military industrial complex a great deal of technical experience and prestige as a world leader alongside other powerful nations in weapons design and development, echoing the words of Denel’s CEO Mr. Talib Sadik who said:

“This is a product that the entire South Africa can be proud of – locally designed, locally manufactured and now ready for deployment by our local Air Force.”

HISTORY OF THE ROOIVALK

During the South African Border war with Angola, The United Nations slammed South Africa with an arms embargo. Unable to get arms from any arms manufacture, Undeterred the South African Government bypassed the sanction by forming an arms company Armscor in the late 1960. Armscor sole aim was to get around the arms embargo. With time, Armscor became Denel which is the designer of the Rooivalk and most of South Africa’s military equipment.

Confronted with an sever international arms embargo and certain military obsolescence, the then Apartheid South African government was forced to manufacture it’s own arms and ammunition locally either by modifying foreign made arms or through clandestine acquisition from the international black market. The South African government, in an attempt to go-around the arms embargo established Armscor in 1960. Armscor later morphed into present day Denel Systems.

Although, the Rooivalk is wholly South African made however, certain technical sub-components which could not be produced in the country such as the turboshaft engines and other dynamic systems such as the main and tail rotor systems and the gearboxes were sourced from the Oryx utility helicopter which itself is a reversed engineered copy of the Aerospatiale Puma. The Oryx is literally a vastly upgraded Puma helicopter. 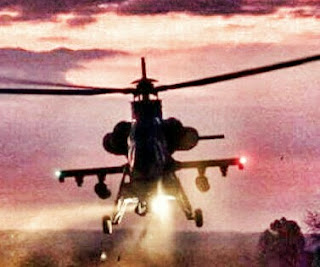 A Rooivalk at night

The South African made attack helicopter Rooivalk has proven itself to be a world class helicopter rivaling those of more advanced countries such as the USAF AH-64 Apache, Bell AH-1 Super Cobra, Mil Mi-28 Hunter and the rest of them. Although not a very sexy or sleek chopper it is very effective at getting its job done as shown during the combat action in Democratic Republic Of Congo (D.R.C). Like most South African made systems it is more utilitarian and practical than beautiful, something like an ugly duckling with a ‘swanish’ spirit.

The Rooivalk was borne out of a need to provide air support for the South African National Defense Force, The SANDF had no gunship to escort its troops and helicopters also there was no suitably armored or well armed helicopter to support airborne assault operations which the South Africans were especially good at.

At the time the Rooivalk was being planned, most African countries has been steadily building up it’s tank force such as Angola and an attack helicopter equipped with a guided anti-tank missile would be a force multiplier in case a conflict should arise. The Rooivalk can also be used to suppress air-defense missile/gun site and raid hostile enemy camps.

In terms of armament, the Rooivalk carries a wide range of weapons systems depending on the mission at hand. With its advanced sensors, it can track and engage targets from long range coupled with a comprehensive electronic warfare suite for self defense.

Political factors has hindered it’s sales to other nations. Nevertheless. the Rooivalk’s excellent performance against insurgents in the Democratic Republic of the Congo during its 2013 peacekeeping mission has earned it’s place as Africa’s Golden Warrior.

Although, the Rooivalk wasn’t built from scratch as the sensitive helicopter technology was not available to South Africa at that time and waiting to develop such technology would have been time consuming making the project impractical, it was decided to base the Rooivalk largely on the South African Oryx which itself is a reversed engineered version of the French Aerospatiale Puma since the Puma was readily available in the country at that time.. The Rooivalk even used a slightly modified Puma engine.
The Rooivalk can operate in a high-threat, high-intensity environment having a crash-resistant structure which improves survivability for both the pilot and helicopter. It primary arnmanment is the F2 20 mm cannon with about 700 rounds. It can also be armed with upto sixteen Mokopa ZT-6 long-range anti-tank guided missiles (ATGM), 4 × MBDA Mistral air-to-air missiles or 38 or 76 × 70 mm rockets.

At about $40 million USD the Denel Rooivalk is an attractive attack helicopter to own by any country especially low-budget military mostly found in Africa. The Rooivalk has placed South African industry and technology in the global map creating a significant field of technical experience and expertise for the country 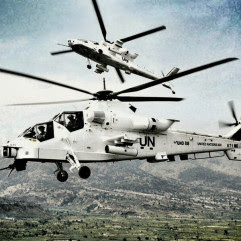 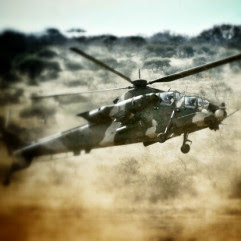 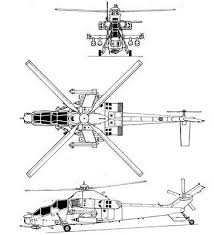