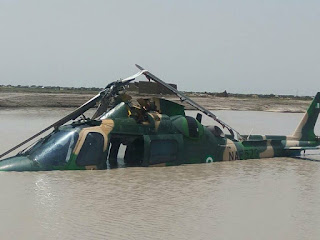 A Nigerian Air Force Agusta 109 helicopter was brought down on a body of water by the crew yesterday after it developed a ‘technical glitch’ as reported by the Nigerian Defence Headquarter spokesperson Air Commodore OLATOKUNBO ADESANYA on 6 July. The incident occurred during a joint arms counter insurgency operation between the Air Force and the Army in the North Eastern Borno state.
Fortunately, there was no loss of live as the helicopter crew decided to ditch the chopper in a large pool of water to prevent casualty and minimize  damage to the helicopter.
According to the picture released, it appears that the main rotor blade of the Agusta 109 was severely damaged during the hard landing and the fuselage is partially immersed in water. The Nigerian Air Force operates a small fleet of thirteen Agusta 109 helicopters acquired from Italy used for light transport and utility.