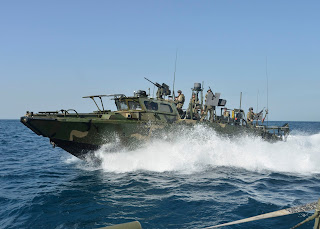 The Chinese government has gifted four patrol boats to the Ghanaian navy as the two countries signed a bilateral defense agreement. The four patrol boats would be used to strengthen the Ghanaian navy’s presence in the Gulf of Guinea.
The boats comes as part of a $7.5 million military assistance package to Ghana to enhance the military cooperation between the two countries. The Chinese ambassador Mr. Sun Baohong and his Ghanaian counterpart Dominic Nitiwul signed the Memorandum Of Understanding on July 13th in the Ghana Armed Forces Headquarters in Accra.
According to  Mr Dominic, he said that the Chinese Navy will be sending six specialist and advisers to help train the Ghanaian on how to operate the boats.
Ghana will later this month receive four patrol boats from China as part of a military cooperation deal between the two countries. China has also offered the Ghana Armed Forces a $7.5 million assistance package. 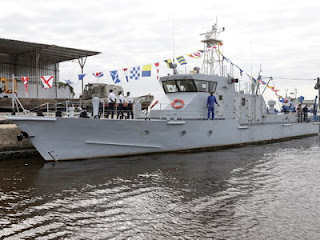 In a related news, China has also donated a 27 meters Predator class patrol vessel to the Ivory Coast Navy to enhance operational readiness in combating maritime crimes. The vessel was commissioned by the Chinese Ambassador to Cote d’Ivoire Tang Weibin on July 14th, he said that this vessels is a major step in Chinese-Ivory Coast cooperation.
Chinese experts are currently on the way to Ivory Coast to show the navy on how to use the boat. Also donated are naval repair equipment worth $4.4 million and technical assistance in the area of Maintenance, Repair and Overhaul (MRO)