South African And Its Nuclear Programme. 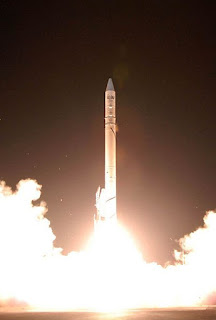 When Nuclear bombs or Nuclear weapons is mentioned most people usually get the idea that it’s a topic for the major powerful nations like the U.S, China, Russia, India, Iran and more lately North Korea but that not the case. In our own African Backyard down south, South Africa developed and built actual working Nuclear bombs during the Apartheid era. Although, The South African Government at that time announced to the world that it have dismantled its nuclear bombs and discontinued its Nuclear weapon research and programme. South Africa is now currently a member of Nuclear Non-Proliferation Treaty.

Since the 60’s SA has been looking for ways to produce weapon of mass destruction, the SA Govt commissioned Operation Coast in 1983 to produce and develop nuclear, Biological and Chemical weapons with its associating protective measures such as suits, masks e.t.c.
As research continues, the AEC succeeded in building a gun-type design for ‘cold test’ in the Pelindaba two nuclear test shaft. 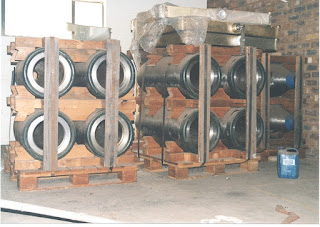 The gun-type weapon is a type of nuclear fission weapons which works by assembling one part of a nuclear material into another i high speed. It uses an artillery type barrel to shoot one hollow nuclear material in to a spike which enters and fits. The performance of this type of design usually have low efficiency so Uranium is usually used unlike Plutonium. The ‘Little Boy‘ bomb which was used against Hiroshima Japan was a gun-type nuclear device.
During the 80s South Africa produced six nuclear bombs with the seventh under development before the country renounced the weapons development programme and dismantled all of them in 1989.
About 220kg of enriched Uranium was extracted and melted down from the weapons and stored in the vault of a silver processing facility in Pelindaba.
A family of four military vehicles (RSA-1 through 4) were developed, in addition to work on a space launch variant – the RSA-5b. The fully weaponized nuclear device developed by Armscor was designed to be deliverable by both aircraft delivered bomb, and as a warhead for the RSA

Although controversial, the United States alleged that South Africa tested its nuclear weapons at the Prince Edwards Islands off the coast of Antarctica in what is today known as the Vela Incident. In 22 Sept, 1979 the U.S Vela Hotel satellite detected a double flash which is a precursor for a nuclear blast although this claim is highly disputed even till date.
The U.S Department of Defence (DOD) and Defence Intelligence Agency (DIA) believes that the double flash is a result of Israeli-South African nuclear weapons test.

Information relating to the Vela incident is classified in South Africa and the United States. During that period, expert investigation says otherwise- that it could have been a ‘spurious electronic signal’ from a a malfunctioning sensor in an old satellite. The U.S defence Boeing WC-135 aircraft used primarily to detect nuclear debris and fall-outs made several flights in the area and no evidence of nuclear was later found.

In the early 1980s, the program employed about 100 people, of which only about 40 were directly involved in the weapons program and only about 20 actually built the devices. The rest were involved in administrative support and security.

For years, the Israeli’s foreign policy towards apartheid South Africa was to condemn apartheid although it did maintain a mutually beneficial commercial and mutual ties. However, Israel did maintain a diplomatic mission in Pretoria discreetly.
According to a renowned researcher Sasha Polakow-Suransky, in his book The Unspoken Alliance: Israel’s secret alliance with Apartheid South Africa, he wrote that a large number of Israeli government officials and scientist were living and working in the Pelindaba Nuclear facility.
The Israeli government further approved the sale of the Jericho II ballistic missiles to South Africa also during the initial testing of the missile, South African Defence Forces commanders were said to be present. The Jericho II was subsequently licenced for production in South Africa as RSA-3 as a space launcher vehicle. The RSA-1 was a South African version of the Jericho I while the RSA-2 – the Jericho II.
POSSIBLE WEAPONS DELIVERY
South Africa initially intended to deliver the weapons using it’s Air Force Canberra and Buccaneer bombers but the use of sophisticated ant-aircraft missiles and artillery defence systems by its neighboring countries caused great concern for the South African mission planners who later decided to focus on using a missile platform. The missiles were to be based on a greatly modified RSA-3 and RSA-4 launchers that were initially build for the country’s space programme. This would have put at-least half of the continent within its striking range. 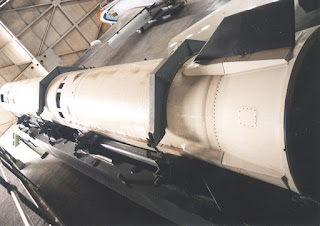 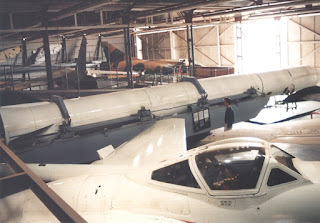 According Al J Venter a South African author who wrote the book How South Africa built six Atom bombs. He wrote that the RSA series launchers were designed to carry a payload of about 200kg into space while the nuclear bombs weight was 340 kg well above the launchers carrying capacity.

The international Atomic Energy Agency (IAEA) after fully inspecting the South African Nuclear development programme facility in 19 August 1994, reported that all the nuclear devices has been fully dismantled and put in storage. The agency said that six fully developed and one partially developed bomb was dismantled accounting for all South African Nuclear Weapons/bomb stockpile.
The missile technology was pursued till 1992 even after the Nuclear weapons program was terminated. However, all ballistic missile development was stopped following Siuth African indication of joining the Missile Technology Control Treaty. Subsequently, Supervisions from the United States were sent to monitor the destruction of important facilities meant for ballistic missile and space launch technology.
The Nuclear Energy Commision (NECSA) has replaced the AEC in South Africa. The NECSA was established in 1999, it primary function is to promote the Research and Development (R&D) of the nuclear technology for peaceful use this include how to process and store nuclear materials safely.
This makes South Africa the first nation in the world to give up all its nuclear arms voluntarily.
REFERENCE
Advertisements
Tags: South Africa
Share128Tweet80