As the world economic situation worsens, South African Air Force (SAAF) was forced to keep some of its SAAB JAS 39 Gripen in ‘Active Storage’. The SAAF has 19 units and 9 two-seaters of the D model Gripens. About 12 of this were kept in storage as the ever dwindling defence budgets and increasing cuts could not afford to keep them in the air.
In a press briefing made in the Paris on June 18, by the Commanding Officer  in the 2nd squadron tasked with operating the Gripen, Lt Col Josias Mashaba said that all of the Gripen has been removed from storage and are currently in flight capable status. According to him, the primary reason for bringing the Gripens out of storage is due to low availability of aircrafts to undertake critical missions for SAAF. The Gripens are kept in the WaterKloof Air Force base, SA. 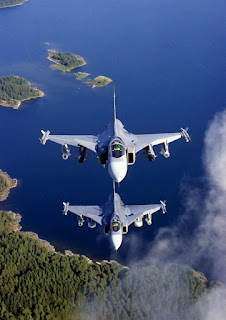 Current South Africa’s defence budget is a meagre 0.9% of the GDP as opposed 2.9% in 1994 , this has put considerable strain of flight operation and combat readiness of the entire military force. However, Lt Col Josias did say that the SA Govt. is working on increasing defence spending to at-least 2.0% next year.
The SAAB JAS 39 Gripen has one of lowest operating cost in fighter jets of its class, its operating cost is about $6,300-$7,800 per hour as compared with the F-16 Falcon which has about $22,514 while the MiG-29 Fulcrum is around $30,000 both aircraft being in the same class with the Gripen.
A new role has been added to the Gripens already expanded roles– it would begin assisting anti-poaching units in combating poachers. Although this might not exciting role for the Gripen pilots since it was designed primarily for combat but the Gripen jet with its potent panoply of advance sensor suites such as the Rafael Litening III targeting pods, Night Vision devices and communication gadgets would fly at night around the Zimbabwian borders where the poachers operate.
SAAF acquired 26 D-model Gripen in 1999 which is currently their main combat aircraft. The Gripen was modernized with home-grown South Arican technology, a new datalink has been developed to be used on the Gripen known as the Link ZA. The Link ZA can share instanteneous data between the SAAF Lead In Fighter Trainer (LIFT) BAE Hawk, the Gripen and other allied air- and ground-stations.