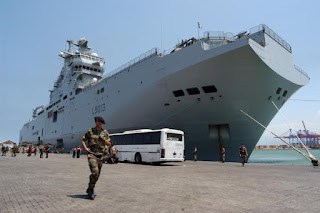 OVERVIEW
From miles away you’ll see the tall uncluttered mast with it’s sleek hull, standing really tall amidst an array of other Egyptian Navy warships. From astern, the docking entrance can be discern easily while from the fore she looks like a Majestic Aircraft Carrier. Unfortunately, she is no carrier.

As the Deck hands scurry about their day/night activities, securing the helicopters on the deck. The Marines on-board prepare their Landing craft to begin an exercise. The Captain goes to the bridge to make sure all is in proper order before issue the command to get underway.

The Officer of the watch makes the announcement: “Captain in the bridge.”

All Hands! All Hands!! the Captain announced. The ship is underway. Helmsman bring her about zere-six-zero (0-6-0) degree to starboard, Engine at 15 percent thrust, keep her steady at 8 knots.
And there she goes steady as a rock yet fluid as the Mediterranean sea, the LHD Gamal Abdel Nasser (L-1010) sails into wind under the setting African sun. 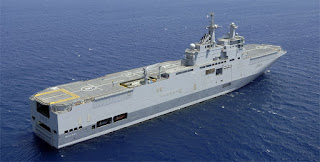 The Mistral-class Landing Helicopter Dock vessels (LHDs) is currently the largest and biggest warship in the African Continent with a maximum displacement of 21,300 tonnes and an empty weight of 16,500 tonnes although not the most powerful ship in African since she carries minimal armament of only two Simbad systems SAM and four 12.7 mm M2-HB Browning machine guns.

However, The Mistral can carry a total of 16 heavy or 35 light helicopters plus a total of 900 soldiers with their corresponding equipment. It can otherwise carry 60 vehicles with up-to 40 Main Battle Tanks (MBT). It has six landing spots on the deck for air assault, Search and Rescue operations.The ships are also equipped equipped with combat management, tactical naval information and satellite communications systems which allows them to be used as an Operations Headquarters for an expeditionary force. Furthermore, it has a 69-bed hospital for providing medical aid to troops wounded in combat or for humanitarian services.

Egypt is the only country to operate this type of naval vessel both in Africa and the Middle East. The Mistrals will be used primarily to protect Egypt’s interest in both regions (North Africa and The Middle East), it will also be used to secure Egypt’s gas fields in the Mediterranean. With a crew of 160 (20 officers,  60 quarter-masters, 80 petty officers). 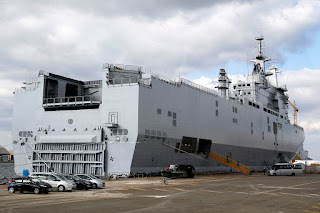 FROM RUSSIA TO EGYPT
The two Egypt’s Mistrals were originally intended for the Russian Navy but due to Russia activity in the Crimea in 2013, France decided to seize the ships and hand it over to new customers with various countries indicating their interest in owning the ships. The countries includes Canada, Brazil, India, Vietnam, South Korea, Saudi Arabia, Netherlands, New Zealand, Singapore and even China and the U.S, Algeria is also considered the purchase while South Africa, The United Arab Emirates, Malaysia and also reportedly expressed interest in the Mistral.

Egypt was selected because France-Egypt relations and trade was at an all time high largely due to chilling of the U.S-Egypt relations after the Abdel el-Sisi coup which toppled the democratically elected Muslim brotherhood. Egypt purchased both vessels for a cost of about 950 million euros.

The next in line for the largest warship in Africa is the South African fleet replenishment ship SAS Drakensberg (A301) at 12,500 tons full load (6,000 tons light) and the third is the Algerian amphibious transport dock Kalaat Béni Abbès at 8,800 t (8.661 long tons).
The first ship arrived in late June after taking part in a joint naval exercise in France. The arrival of Al-Sadat’s carrier coincides with the 43rd anniversary of the 6 October War in 1973.
The Egyptian Navy has ordered 32 naval verion of the Ka-52 Alligator to use on both vessels.